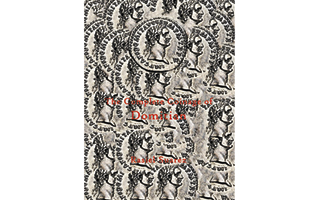 The Complete Coinage of Domitian by Rasiel Suarez is the latest entry in his eBook series on ancient Roman coinage.

This new work is presented in PDF format. It expands and revises the section on coins of the emperor Domitian that appears in Suarez’s second edition of the Encyclopedia of Roman Imperial Coins, a book that was released in print in 2010.

Starting with a database of more than 10,000 auction lots spanning four decades, more than 1,000 varieties were identified including dozens previously unpublished, according to Suarez. This researched study provides the most detailed and accurate catalog of this emperor's coinage to date, Suarez said.

All entries now include true number-based rarity counts, values from actual prices realized in various grades, precise dating available, and printed and online referencing. Weights are now known at a much greater level of precision for each of the available denominations and the photographic plates feature larger, sharper coin photos and in greater number than ever before, according to the author.

This eBook is priced at $10 and available for download from http://dirtyoldcoins.com.

For more info on the Complete Coinage series by Suarez, visit www.dirtyoldbooks.com/CC/index.html, email Suarez at rasiel@dirtyoldcoins.com or telephone him at 360-499-2070.