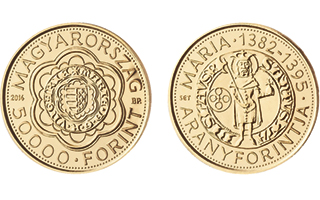 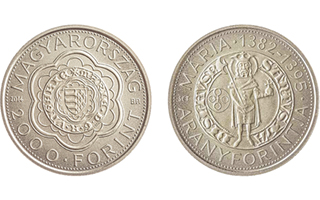 For the first time, Hungary has issued a base metal version of a precious metal coin. The 2,000-forint coin has a mintage limit of 5,000 pieces.

The third issue in a series depicting the medieval Hungarian gold florins is now available from the National Bank of Hungary (Magyar Nemzeti Bank).

New for 2014 is the release of a 2,000-forint base metal version of the design, which is also available in two Brilliant Uncirculated gold 50,000-forint versions, one a regular-size issue and the other a piedfort (double-thick) issue. The addition to the 2014 grouping is the first base metal version of a precious metal coin to be issued in Hungary, according to the National Bank of Hungary.

The obverse of the 2014 coins depicts the obverse of Queen Mary’s gold florin with a field of six stripes in a rosette. A figure of Saint Ladislaus holding an axe is found on the back, along with a Mint mark of a cross in a circle, a mark used exclusively on the coins minted under Queen Mary’s reign. The models are the designs of sculptor E. Tamás Soltra.

The original coin is cataloged as Friedberg 8 in Gold Coins of the World by Arthur L. and Ira S. Friedberg and trades for several thousand dollars depending on condition.

The “regular” version of the gold coin is struck to a ducat standard, meaning it is .986 fine gold weighing 3.491 grams. Limited to a mintage of 2,000 pieces, it costs $397.75 from the Hungarian Mint’s North American representative, Coin & Currency Institute.

The piedfort version is actually four times the weight of the regular issue (most piedforts are double weight and thickness). The extra thickness allowed room for an edge inscription reading +MARIA•DEI•GRATIA•REGINA•VNGARIE, which translates to “Mary, by the Grace of God, Queen of Hungary.”

The piedfort coin's mintage limit of 500 pieces sold out at the mint and the coin is available on a “first-come, first-served” basis from the distributor for $1,775 each, according to the distributor.

All of the coins measure 20 millimeters in diameter.

Mary, Queen of Hungary, was born the daughter of King Louis I and Elizabeth Kotromanic of Bosnia in 1371. King Louis died on Sept. 10, 1382, and one week later Mary was crowned Queen of Hungary in Székesfehérvár, but her mother assumed the regency for the 11-year-old child.

In August of 1385, Mary was betrothed to Sigismund, but her mother wished to keep power, and successfully prevented Sigismund from taking the throne for some time. Elizabeth was supported only by some of the barons and, pressured by the opposing faction, she had to accept the coronation of Charles Durazzoi (the Short) as King Charles II of Hungary on Dec. 31, 1385. The queen, however, arranged to have Charles II assassinated by Balázs Forgách on Feb. 7, 1386, at the Castle of Buda (Charles died of his wounds on Feb. 24 in Visegrád).

After Charles' death, Mary was nominally ruler again, but in practice the country was run by Elizabeth and her main supporter, Palatine Nicholas I Garai. In 1386, the queen and her mother were attacked while traveling in Croatian territory and captured, and Elizabeth was strangled in front of her daughter’s eyes. Mary was only released from captivity after the coronation of Sigismund as King of Hungary on March 31, 1387. She did not participate in ruling the country then, either, as her husband ran the affairs of state. On May 17, 1395, the pregnant queen died as the result of falling from her horse while hunting. She was buried in Nagyvárad (now Oradea, Romania) next to the tomb of Saint Ladislaus.

Queen Mary had gold florins, silver denars and obol coins minted during her short reign. Her gold florins were a direct successor to those minted by her father, featuring the Hungarian arms and those of the house of Anjou on the obverse and a standing figure of Saint Ladislaus on the reverse.

Mint marks on the gold coins were not yet known and so far it has not been possible to determine where the coins were minted. Logically speaking, the most important mints might have been involved, such as Buda or Körmöcbánya (present-day Kremnica, Slovakia) or the mint in Transylvania, where gold coins had previously been minted. There is similar uncertainty about when minting of Queen Mary’s coins came to an end — whether that was in 1387 when Sigismund ascended the throne or not until her death in 1395.

All orders should include $5.75 for shipping and handling in the United States. Shipping to other countries will be based on actual cost. Vermont residents must add 6 percent sales tax.

To order or for more information, write the Coin & Currency Institute at P.O. Box 399, Williston, VT 05495, telephone the agency toll free at 800-421-1866, email it at mail@coin-currency.com, or click on the Hungarian flag at www.coin-currency.com for secure website ordering.