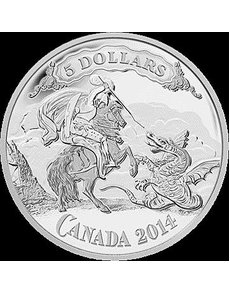 A new Proof .9999 fine silver $5 coin from the Royal Canadian Mint features the vignette of St. George slaying the dragon, as taken from the 1859 Bank of Western Canada $5 note. 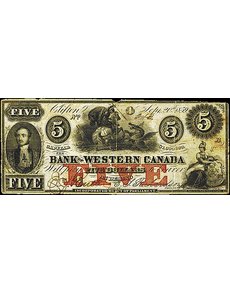 The Bank of Western Canada in Clifton (what is now Niagara Falls, Ontario) was a spurious bank owned by an American. Though the “bank” issued four different denominations of bank notes, experts report that none were ever redeemed.

When the Bank of Western Canada opened in 1859, the less-than-credible establishment used a familiar image of St. George slaying the dragon on its $5 note.

The design may have been influenced by Benedetto Pistrucci’s design for Britain’s gold sovereign coins, according to the Royal Canadian Mint. The vignette from the bank note design is now being revived for a Proof . 9999 fine silver $5 coin.

Despite the injection of legitimacy provided by the vignette, the bank never redeemed any of its notes before having its charter revoked in 1863 amid a larger banking scandal sweeping the nation.

The chartered bank was owned by a New York tavern keeper who corralled a respected local in Clifton (in what is modern-day Niagara Falls, Ontario) to represent him at the bank in exchange for stock in the bank, according to Canadian Bank Notes, sixth edition, by R.J. Graham. The bank issued $1, $2, $5 and $10 notes.

It was common at the time for “wildcat” institutions to issue notes they never intended to honor, eroding public faith in chartered banks’ notes. An outcry fed national momentum toward gold-backed government-issued notes, a practice that began with Provincial notes in 1866 and Dominion notes following Confederation.

Royal Canadian Mint engravers copied the vignette design from the note for the second coin in a series featuring designs from historic Canadian bank notes.

The coin weighs 23 grams and measures 36 millimeters in diameter. With a mintage limit of 8,500 pieces, the coin costs $69.95 in Canadian funds.

The U.S. prices for collectors in the United States buying from the RCM fluctuate with the exchange rate of the U.S. and Canadian dollars at the time of purchase.