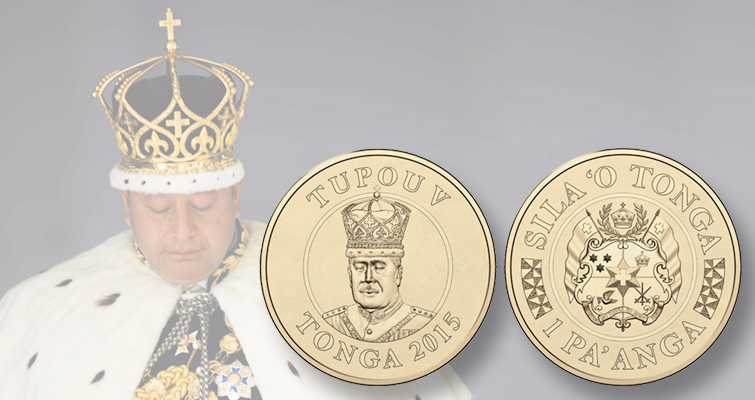 Tonga’s first currency reform in 50 years includes the release of a new denomination for coinage, the 1 pa’anga, which celebrates the late King Tupou V and marks the coronation of his brother, King Tupou VI. 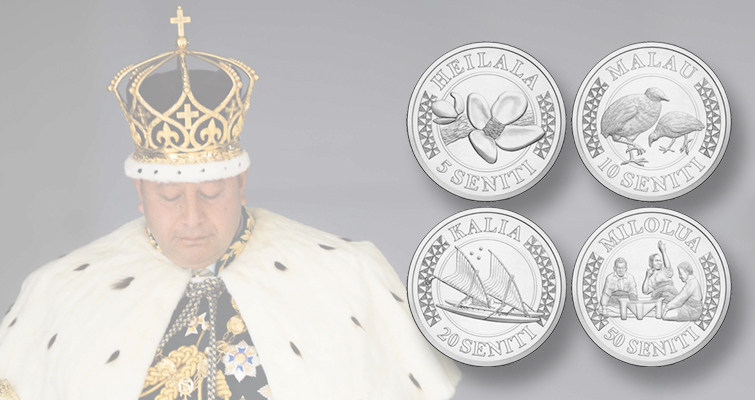 Tonga issued a set of five new 2015 coins for circulation to mark the coronation of King Tupou VI. The coins herald the king’s coronation, but also mark the first coinage reform in Tonga in 50 years.

Though King Tupou VI ascended to the throne in 2012, the coronation did not take place until July 4, 2015.

The Royal Australian Mint struck the new family of coins for Tonga. With the five new coins, Tonga has discontinued use of the 1- and 2-seniti coins and began issuing the 1-pa’anga coin.

The new coins are smaller, lighter and thinner than previous Tongan coins.

The obverse of the aluminum-bronze 1-Pa’anga coin depicts the late King George Tupou V wearing a crown. The arms of Tonga appear on the reverse.

The other four coins are struck in copper-nickel and depict the new King Tupou VI, without a crown, on the obverse.

Reverse designs on each of the four coins depict images, themes and concepts that reflect Tonga’s history, culture, economy, and heritage.

The 50-seniti coin depicts the introduction of the Milolua (dance) during the Tongan Kava Ceremony. A native sail boat called a lalia is on the 20-seniti coin. Two Malau birds, also known as the Tongan megapode, are depicted on the 10-seniti coin, and the heilala flower is on the 5-seniti coin. Malau are the world’s rarest and smallest megapode, according to the Reserve Bank of Tonga.

Tonga is a Polynesian kingdom of more than 170 islands, many uninhabited, many featuring white beaches, coral reefs, and tropical rainforests. Tonga is located in the South Pacific Ocean.

Dealer Joel Anderson has obtained sets of the new coins and offers them for $12.50 plus shipping and handling.