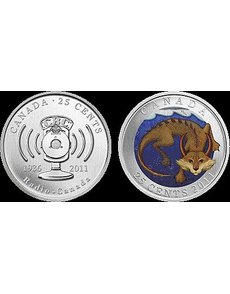 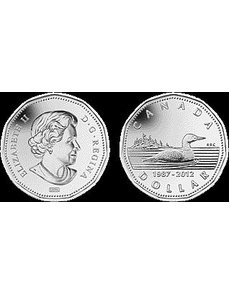 Next year will mark the 25th anniversary of the Loon dollar, but a new silver-plated example issued Nov. 1 begins the celebration a bit early. 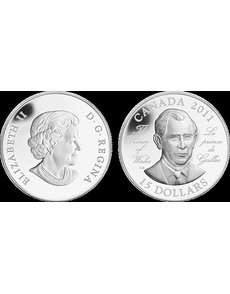 Prince Charles is the third and final royal featured in a series of Prooflike ultra high relief .925 fine silver $15 coins in the Continuity of the Crown series.

Canadian history, mythology and royalty are featured on several new coins from the Royal Canadian Mint.

On Nov. 1, the RCM celebrated the upcoming 25th anniversary of the Loon dollar, which made its debut in 1987. The release of the anniversary Loon dollar was preceded by several Sept. 1 releases: a pair of oversized 25-cent coins marking an anniversary for CBC radio and the mythical creature Mishepishu, and a $15 coin honoring Prince Charles of Wales.

CBC/Radio-Canada made its first broadcast on Nov. 2, 1936, and since then the Canadian Broadcasting Corp., Canada’s public broadcaster, “has contributed to the nation’s identity by broadcasting the diverse stories of this country’s people,” according to the RCM.

The reverse of the Specimen finish CBC copper-nickel 25-cent coin shows the microphone created by CBC/Radio-Canada for the Royal Tour of King George VI and Queen Elizabeth in 1939, which was designed for outdoor broadcasts. The microphone’s special wind-resisting device, commonplace today, represented a major technological advance at the time, according to the RCM.

The design on the coin is credited to RCM engravers.

Mishepishu, a mythical monster of the Great Lakes, appears on the other oversized 25-cent coin. It is the third coin in the Canadian Mythical Creatures series.

For centuries, Ojibwe legends have described a mysterious creature lurking in the depths of Lake Superior. They call it Mishepishu, which means “Great Lynx,” to describe its wildcat shape. “This clever shape-shifter is also believed to swim the waters of Lake Ontario and other Great Lakes in order to protect the precious copper found in the rocks throughout the region,” according to the RCM.

A colorful image of Mishepishu, designed by artist Emily S. Damstra, appears on the reverse of the Mishepishu coin, which is struck from nickel-plated steel and bears a Specimen finish.

All coins discussed in this article feature the Susanna Blunt effigy of Queen Elizabeth II on the obverse.

Collectors often express a desire to “play with their coins” but a new product from the RCM, offering a limited edition “Loonie,” allows them to do just that.

Robert Carmichael’s now iconic Loon design was not the original design selected for Canada’s first small-sized dollar, introduced in 1987 and soon to mark its 25th anniversary. Officials planned to use the long-running Voyageur design found on Canada’s older, larger dollar coins for the smaller coin. However, after the Voyageur dies for the coin disappeared while in transit, a replacement design was quickly selected. Officials turned to Carmichael’s Loon design, which had been originally submitted in a 1978 design competition for a different coin and since maintained in a bank of designs. Canadians have since dubbed the coin the “Loonie.”

A silver-plated example of a bronze-plated steel Loon dollar, bearing the double dates of 1987-2012, is packaged in a holder designed especially for young collectors: it includes a “kid-friendly” “Build your own Loon” paper toy and a full color mini-book with illustrations telling the 25-year story of the Loon dollar.

The Uncirculated coin weighs 7 grams and measures 26.5 millimeters in diameter, the same measurements as the circulating version (which is composed of nickel-bronze).

With a mintage listed as “while supplies last,” the 25th Anniversary of the Loonie Coin Card retails for $24.95.

Continuity of the Crown series

The third and final Prooflike .925 fine silver $15 coin from a series of ultra high relief coins honoring the continuity of the crown honors the Prince of Wales (Prince Charles).

The portrait of Prince Charles has the raised edges normally seen on a sculptured military medal, according to the RCM, achieved by striking the coin four times, “followed by extensive refining and polishing — an intense hand-crafted process that produces a unique finish for each coin.”

Laurie McGaw designed the reverse of the coins in the series, the previous two issues of which honored the two sons of Prince Charles, Prince William and Prince Harry; those were released March 15.