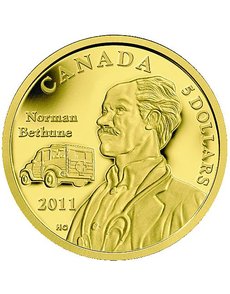 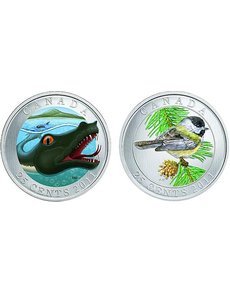 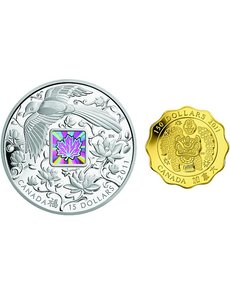 Two new Proof coins from Canada continue series directed toward the Asian market: the Maple of Happiness .9999 fine silver $15 coin and the Blessings of Happiness .99999 fine gold $150 coin show scenes and symbols that are important in Chinese culture.

Themes in the June 16 release range from a mythical monster, a native bird, a historic doctor, the maple leaf and Chinese culture. Most of the coins in the release are part of already-running series.

The second release in the Canadian Mythical Creatures series honors Memphré, a legendary reptile resident of Lake Memphremagog in Quebec. Sightings each year, as many as eight in some years, keep the legend alive, according to the Royal Canadian Mint.

On the coin, the aquatic creature swims toward the viewer and the right, in the scene by Emily S. Damstra on the reverse.

Susanna Blunt’s effigy of Queen Elizabeth II graces the obverse of this 25-cent coin and all the coins in the June 16 release.

With a mintage “produced to demand,” the Memphré coin is priced at $24.95 Canadian (all pricing presented here is in Canadian dollars).

On the other new oversized Specimen 25-cent coin, this one from the Birds of Canada series, a black-capped chickadee nestles amid pine branches. The distinctively marked bird is found in wooded areas of Canada and the northern United States, and is the official bird of New Brunswick. Arnold Nogy designed the coin.

The coin is the fourth since revival of the popular Birds of Canada series more than one year ago.

As the Spanish Civil War raged in the 1930s, Dr. Norman Bethune traveled to Spain to assist the Communist-supported Republican side in its fight against Spanish fascists supported by Nazi Germany. Some three-quarters of the wounded were dying from blood loss that should not have been fatal, so Dr. Bethune’s solution was to bring medical care to the front.

The mobile transfusion unit enabled Dr. Bethune and his medical team to save thousands of lives, performing up 100 blood transfusions daily, according to the Royal Canadian Mint.

The mobile transfusion vehicle appears with Dr. Bethune on the reverse in a design by Harvey Chan.

This is the first tenth-ounce gold coin the RCM has offered outside of a set.

Two more coins from the latest release feature themes that are intended to interest the Asian market.

A Proof Maple of Happiness .9999 fine silver $15 coin, designed by Simon Ng, shows a magpie, China’s “bird of happiness,” flying above a tapestry of lotus flowers with a selective hologram of a maple leaf in the center of the design.

In Chinese culture, the lion dance is a traditional and energetic display of joy and happiness, so the new Proof Blessings of Happiness .99999 fine gold $150 coin shows a lion.

Designed by Harvey Chan, the ceremonial lion performs a traditional lion dance on the reverse. Firecrackers flank its left side, the explosions depicted by star bursts in the design. Above the lion’s head is a seal with the Chinese character for happiness.

The Blessings of Happiness coin is the third in an annual “Blessings” series that debuted in 2009.

The scallop-shaped coin weighs 10.4 grams and measures 22.5 millimeters in diameter.