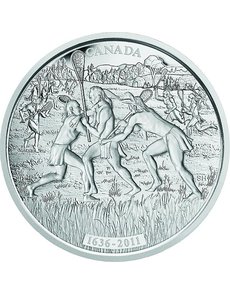 The sport of lacrosse is rooted in First Nations history, and the first historical report of the sport was recorded 375 years ago by a French missionary, the event honored on a new kilogram .9999 fine silver $250 coin. 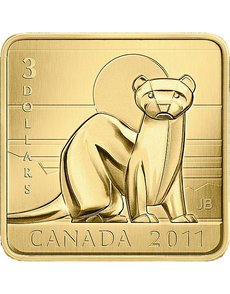 The black-footed ferret, thought to be extinct until found 30 years ago in Wyoming, is the subject of a new Specimen Wildlife Conservation gold-plated silver $3 coin from Canada. 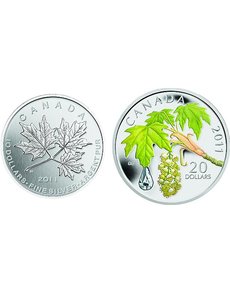 Two new collector coins from Canada celebrate the maple leaf, a national symbol of Canada. The Proof .9999 fine silver $10 coin features a design inspired by the design appearing on the 1-cent coin since 1937, while the other flaunts a colorful scene of a crystal raindrop cascading from a bigleaf maple leaf.

Natural elements, a national symbol and sports are honored on four new collector coins from Canada.

The maple leaf is regarded around the world as the symbol of Canada, and the new .9999 fine silver $10 Maple Leaf Forever coin features three of those iconic leaves.

The half-ounce coin features a Debbie Adams design for the reverse “inspired” by the design that has appeared on Canada’s 1-cent coin since 1937.

The obverse of the new silver $10 coin, as with all the new Canadian coins, depicts the Susanna Blunt effigy of Queen Elizabeth II.

Another maple-themed coin continues a series of Proof Crystal Raindrop .9999 fine silver $20 coins, this year depicting the bigleaf maple (Acer macrophyllum). The bigleaf maple is one of the largest maple trees, and populates the Pacific Northwest region.

The series dates back to 2008, and all of the coins in the series are designed by Celia Godkin.

For 2011, the RCM shows the vibrant green leaves from the native tree, with one of the leaves bent by the weight of a crystal raindrop (a Swarovski crystal). The flowering cluster extends from the branch. The leaves, flowers and branch feature an application of color.

The newest animal honoree in the Wildlife Conservation coin series marks the anniversary of its rediscovery in Wyoming.

The black-footed ferret graces the fourth coin in the Wildlife Conservation series.

The Specimen gold-plated .925 fine silver $3 coin features an animal that, until 30 years ago, was thought to be extinct. Then, on Sept. 26, 1981, a small colony was discovered in Wyoming, and conservation efforts have slowly strengthened the population worldwide.

The ferret stands alert, with the prairie sun behind it, on the reverse of the coin, which as with the previous three issues in the series, was designed by Jason Bouwman.

While hockey certainly is the national sport of Canada during the winter months, lacrosse earns the title during summer.

A new kilogram .9999 fine silver $250 coin celebrates a milestone in Canadian lacrosse history, the 375th anniversary of the first European observation of lacrosse.

One of the earliest documented references to lacrosse in Canada came in 1636, when Jesuit missionary Jean de Brebeuf became acquainted with the game while living among the Hurons people.

Lacrosse (originally called baggataway by the First Nations people) was more than a game to the natives; they also dubbed it “The Creator’s Game,” and believed that the Creator invented the game for His own amusement,” according to the RCM.

Young warriors used it to train, and it was a nonwarring means to settle tribal disputes.

The game flourishes today in Canada as well as (mostly) along the East Coast of the United States, though it has made inroads across America during the past few decades.

At least one dozen players, including three ferociously locked in combat in the foreground, are engaged in the game on the reverse of the $250 coin, in a design by Steve Hepburn. Another seven figures are visible, apparently on the sidelines, in the far background.

Modern teams field 10 players each and attempt to fire a ball into the opposing team’s net or defend against the attack.