New Canadian coin sells out in about a day 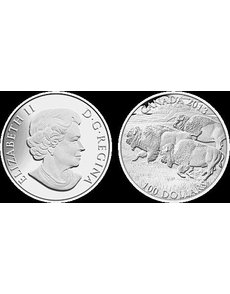 Canada’s newest coin was available at the stated face value of $100 before selling out within about two days. The Bison Stampede silver $100 coin is the first in a series, and expands on a similar coin series offering $20 coins.

A stampede for new collector coins being sold at face value may have left some collectors feeling trampled.

The Royal Canadian Mint on May 16 began selling the first coin in a new Wildlife in Motion series, through its www.mint.ca website. The Reverse Proof Bison Stampede silver $100 coin quickly sold out some time during May 17.

The coin was offered at face value plus shipping, and tax where applicable.

After limiting purchases to three per household during the initial sales period (before the sellout), the RCM reduced the limit to one per household and required orders to be placed by telephone. Customers calling by telephone joined a waiting list for any orders that are canceled.

Several collectors have used the review function at the RCM’s website to complain about the quick sellout of the $100 coin and the change in the ordering limit.

A representative of the RCM had not answered questions about the sales procedure, timing and sellout by press time.

It is customary for RCM Masters Club members (those who order a minimum of $1,000 worth of coins in a calendar year) to receive advance notice and ordering privileges for new offerings.

Several examples of the $100 coin are listed for resale through online auction venue eBay and the Canadian version, eBay.ca, but no confirmed sales have been recorded.

Sales literature provided by the RCM indicate the Bison Stampede coin is the first in a series of 100-for-100 coins, but future designs have not been confirmed. ¦