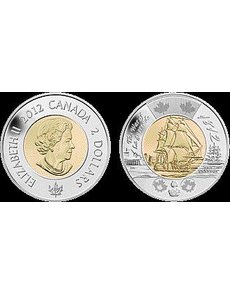 Canada commemorates the War of 1812 battle between the HMS Shannon and the USS Chesapeake with a new circulating commemorative $2 coin. Up to 5 million of the coins will enter circulation.

The War of 1812 was a fundamental turning point in Canada’s history, a struggle from which some of Canada’s earliest unifying moments emerged.

The war — in which the foe was the United States — is now being marked on a circulating commemorative $2 coin, the first such commemorative featuring the RCM’s new alloy and security features that debuted earlier this spring on the denomination.

The Royal Canadian Mint on June 18, as part of the government of Canada’s broader celebration of the bicentennial of Canadian military efforts in the war, began releasing up to 5 million $2 coins celebrating the victory of HMS Shannon over the USS Chesapeake, and its escort of the American war prize into Halifax Harbor.

In June 1813, Captain Philip Broke, Commander of the HMS Shannon, was eager to secure a victory for the British Navy, which had suffered a series of defeats at the hands of the United States. As the Shannon challenged the USS Chesapeake off the New England coast, both ships met with guns at the ready. The battle lasted only 11 minutes, but the decisive victory helped to bolster the confidence of the British Navy, especially at the sight of the captured Chesapeake being escorted into Halifax harbour by a triumphant Shannon.

The historic naval battle in June 1813 resulted in the death of 23 Shannon crewmen. Graves of fallen crewmen are marked in the Royal Navy Burying Ground and at the Old Burial Ground, administered by St. Paul’s Church in Halifax. HMS Shannon’s bell is currently on display in Halifax at the Maritime Museum of the Atlantic.

Key historical figures in Canada’s successful fight in the War of 1812 will also be honored on four new 25-cent circulation coins to be released later in 2012 and 2013. The coins will honor Gen. Sir Isaac Brock, Shawnee war chief Tecumseh, Charles de Salaberry and Laura Secord.

The RCM will unveil those designs in conjunction with their official issue dates throughout 2012 and 2013.

The reverse of the new $2 coin now entering circulation was designed by Nova Scotian artist Bonnie Ross, who has designed several other Canadian coins with nautical themes. The reverse of the $2 shows HMS Shannon leaving Halifax Harbor to do battle on the Atlantic, against a scene of early 19th century Halifax Harbor on the left side, with Citadel Hill visible in the distance. On the far right, a tall ship rests in the well-defended harbor.

The starboard-side, detailed image of HMS Shannon dominates the brass-plated center of the coin. Most of its sails are fully unfurled and filled by a steady westerly wind, its jib boom and bowsprit pointed out to sea.

Engraved at the base of the outer ring is the original figurehead from HMS Shannon’s bow. The rest of the ring features the legend the WAR OF / LA GUERRE DE / 1812, HMS SHANNON and the initials of the artist.

The obverse features the effigy of Queen Elizabeth II by Susanna Blunt, as well as Canada’s official commemorative symbol for the 200th anniversary of the War of 1812 (a script “1812” superimposed over a maple leaf).

In addition to releasing the coins into circulation, the RCM offers five-coin packs at face value ($10) with a maximum order of three packs, but only to Canadian residents. Visitors to RCM boutiques in Ottawa, Winnipeg or Vancouver may also acquire the new coins at face value.