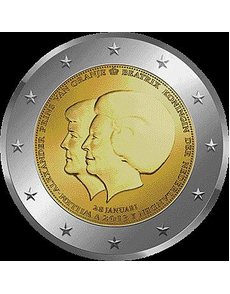 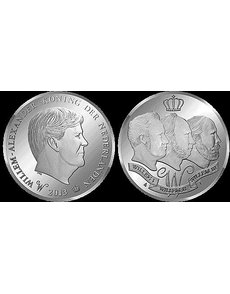 A silver medal is among the items the Royal Dutch Mint is issuing to mark the historic abdication of the throne.

The Jan. 28 announcement from Queen Beatrix of the Netherlands that she would abdicate the throne for her son on April 30 stirred officials of the Royal Dutch Mint to action, making preparations for coins and medals noting the event.

In short order, the Royal Dutch Mint announced a special medal and a pair of Brilliant Uncirculated sets. On Feb. 6 the nation’s Ministry of Finance announced plans to issue a circulating commemorative &euro;2 coin with a joint portrait of the outgoing ruler and her successor, the Prince of Orange, Willem-Alexander. The queen’s son will take over on April 30, the 33rd anniversary of the accession of Queen Beatrix.

The new ruler will be the country’s first king in more than 123 years and the fourth king in the kingdom’s history.

The circulating commemorative €2 coin will be the first double-portrait Dutch €2 coin.

The release date for the copper-nickel coin has not been announced. Twenty million coins, including collector versions, will be issued. The Royal Dutch Mint will issue Brilliant Uncirculated and Proof examples, as well as rolls and bags of circulation-quality coins, for collector sales.

In addition, a pair of BU sets of the eight circulating euro denominations (cent to €2) will be issued. The first set will feature 2013 coins of Queen Beatrix, and the second set will offer the as-yet-to-be-developed 2013 coins with the new ruler.

Complete information about the BU sets has not been announced. Officials are waiting on the approval of the designs. Within a few days the Royal Dutch Mint began offering a medal depicting the Prince of Orange on the obverse and the three earlier kings of the Kingdom of the Netherlands on the reverse. A BU version mounted on a coin card with a mintage of 10,000 is available, as is a Proof .925 fine silver example with a mintage of 2,000 pieces.

Distributor Coin & Currency Institute will offer the BU and Proof coins but pricing was unavailable at press time. Email the firm at mail@coin-currency.com, visit at www.coin-currency.com or telephone the business at 800-421-1866. Medals pricing and availability details may be obtained from the Royal Dutch Mint website, www.knm.nl. ¦