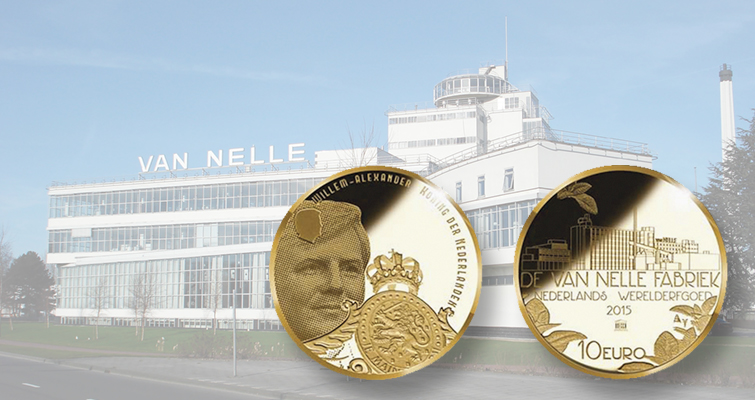 The Van Nelle Factory site, now a UNESCO World Heritage Site, is honored on a new issue of coins from the Netherlands.

The former Van Nelle Factory on the Delfhavense Schie in Rotterdam is the Netherlands’ most important industrial national heritage site. Up until 1995, coffee, tea and tobacco were processed here, but today the building is home to a number of different companies.

The iconic building was placed on the UNESCO World Heritage List in 2014. Now, the former coffee, tea and tobacco company is the subject of the last official commemorative coin of 2015. This is the fourth issue in the UNESCO World Heritage series, following coins for the Canals of Amsterdam (2012), the Rietveld Schröder House in Utrecht (2013), and the Windmills of Kinderdijk (2014).

The Van Nelle factory is one of the pinnacles of Dutch industrial architecture. Indeed, during the opening in 1930, it was referred to as a "poem in steel and glass."

According to UNESCO, "the site is one of the icons of 20th-century industrial architecture, comprising a complex of factories, with façades consisting essentially of steel and glass, making large-scale use of the curtain wall principle. It was conceived as an 'ideal factory,' open to the outside world, whose interior working spaces evolved according to need, and in which daylight was used to provide pleasant working conditions. It embodies the new kind of factory that became a symbol of the modernist and functionalist culture of the inter-war period and bears witness to the long commercial and industrial history of the Netherlands in the field of importation and processing of food products from tropical countries, and their industrial processing for marketing in Europe."

The Van Nelle coin was designed by Kianoosh Motallebi, who will also design the next two coins in the UNESCO series.

The obverse features King Willem-Alexander and the reverse shows the factory building itself.

The silver-plated copper €5 coins weigh 10.5 grams and measure 29 millimeters in diameter. The mintage limit is 250,000 pieces, with 15,000 available mounted in a colorful descriptive card (the remaining are available in circulation or rolls).

The distributor Coin & Currency Institute offers the coins to collectors in the United States.

Shipping and handling are $5.75 per order, and Vermont residents must add a six percent tax. 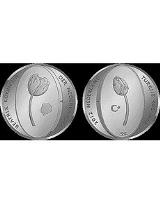 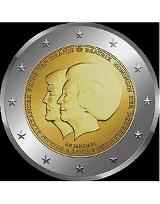 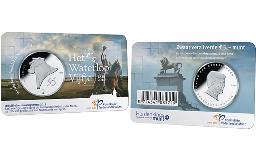