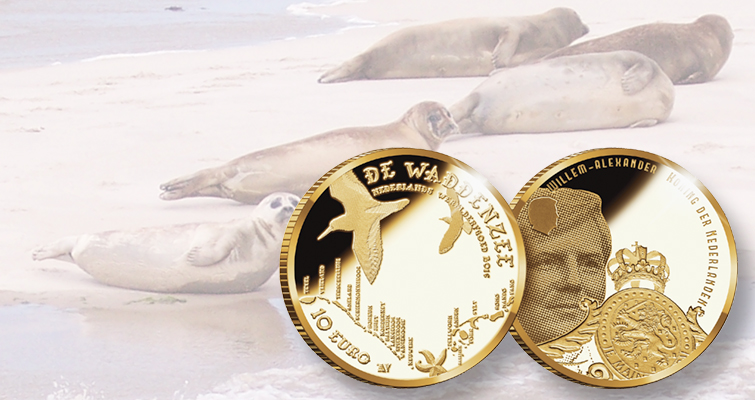 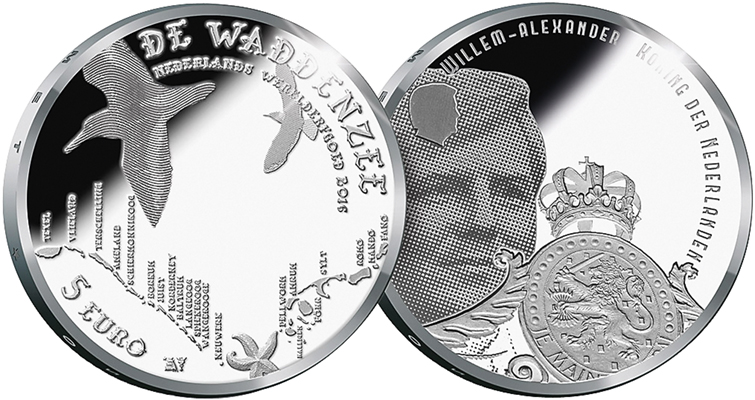 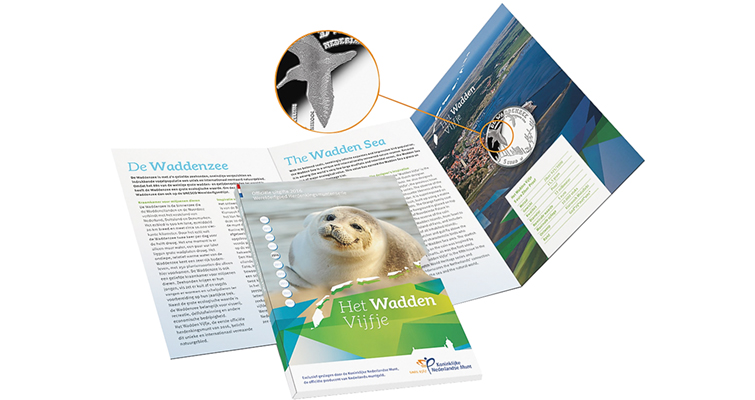 An image of the packaging for the Proof .925 fine silver €5 highlights the new technology dubbed Line Phase Modulation by the Royal Dutch Mint. 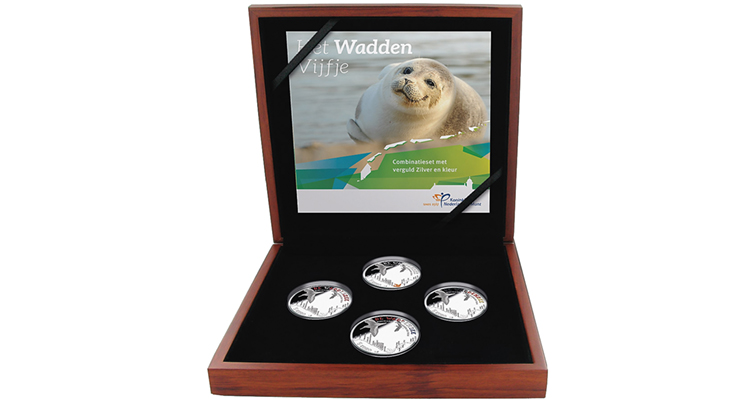 A four-coin set of €5 coins features color and gold-plating on each of the coins.

The first Dutch commemorative coin of 2016 also marks the debut of new technology from the Royal Dutch Mint.

The Proof 2016 silver €5 coin from a series of coins honoring the Wadden Sea will be the first Dutch commemorative coin to feature what the Royal Dutch Mint calls the Line Phase Modulation technique.

The technique was used to highlight seagulls flying over a map of the sea's islands on the reverse of the coin.

In this technique, an existing image is converted to a line pattern. The distance between the individual lines varies, creating the appearance of gray shading. The image is best viewed when tilting the coin, as the wavy lines glitter across the birds in flight.

This coin is part of an annual series celebrating the UNESCO World Heritage Sites in the Netherlands. The 2016 program is the fifth in the series.

The Wadden Sea is an intertidal zone in the southeastern part of the North Sea. It lies between the coast of northwestern continental Europe and the range of Frisian Islands, forming a shallow body of water with tidal flats and wetlands. It is rich in biological diversity.

In 2009, the Dutch and German parts of the Wadden Sea were inscribed on UNESCO’s World Heritage List and the Danish part was added in June 2014. The German part was the setting for the 1903 Erskine Childers novel The Riddle of the Sands.

The Wadden Sea coins were designed by Kianoosh Motallebi.

Base-metal and silver examples are denominated €5, and a gold €10 coin completes the program.

On the obverse is a map of the region with identifying place names, along with local wildlife.

The reverse carries the portrait of King Willem-Alexander.

Circulation-quality examples will be issued at face value through PostNL post offices, Primera shops and the Royal Dutch Mint website beginning June 11. No stated mintage limit was announced for this option.

The Royal Dutch Mint will offer up to 158,000 Uncirculated silver-plated copper €5 coins at face value in 20-count rolls, and up to 12,500 Brilliant Uncirculated versions in numbered coin cards.

The only Wadden Sea coin to incorporate the Line Phase Modulation is the Proof .925 fine silver €5 coin. The coin weighs 15.5 grams and measures 33 millimeters in diameter.

It is available individually in a “luxury collector pack with additional background information,” with a maximum mintage of 10,000 pieces.

Additionally, the Proof .925 fine silver €5 coin is offered in a four-coin set, where three of the coins are embellished with color. The fourth coin is the first Dutch coin to feature gold-plating.

The colors on the coins represent each of the countries in the Wadden Sea protected area, the Netherlands, Germany, and Denmark.

Distributor Coin & Currency Institute will offer some of the coins to North American buyers.

The Royal Dutch Mint website can be found online. 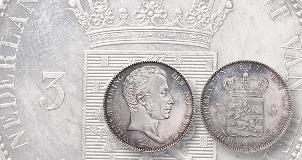