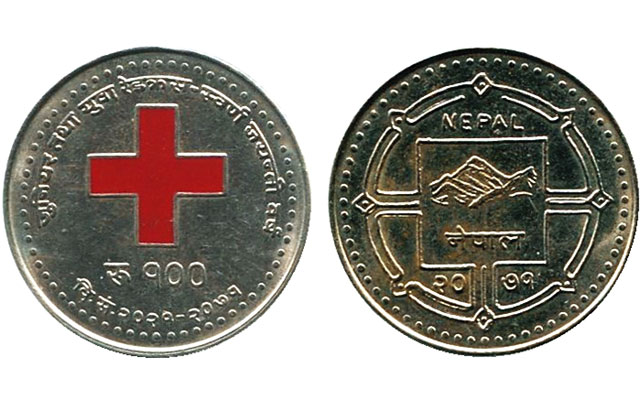 The Nepal Rastra Bank (the Central Bank of Nepal) has issued a colorful commemorative coin to mark the 50th anniversary of the Nepal Junior Red Cross.

The copper-nickel coin was released in March according to Joel Anderson, a dealer in the United States now offering the coin. Anderson reports that the coin is a circulating commemorative. However, an eBay.com seller in Nepal reports the release date as Feb. 19 and states the coin has a mintage limit of 2,000 pieces, suggesting it is not circulating.

A companion silver 1,000-rupee coin appears to have been issued also, based on eBay.com sales, but Anderson does not have that version.

Founded in 1965 as a wing of the Nepal Red Cross Society, the Nepal Junior Red Cross has some 800,000 members in almost 3,500 circles spread throughout the country, Anderson said.

The 100-rupee coin is available from Anderson for $10, plus shipping and handling.