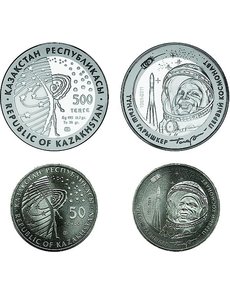 Images courtesy of www.cis-coins.com and the National Bank of the Republic of Kazakhstan. 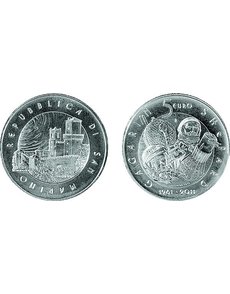 A seminal moment in the American-Soviet “Space Race,” when Soviet astronaut Yuri Gagarin slipped out of the earth’s atmosphere and became the first man in space, is celebrated on new commemorative coins from Kazakhstan and San Marino.

With his orbit into space during the Vostok I mission, Gagarin made history April 12, 1961, but American Alan Shepard was not far behind, becoming the first American into space with his trip on the Mercury spaceship called Freedom 7 on May 5, 1961.

New circulating and commemorative coins from Kazakhstan honor Gagarin’s flight, while a new collector coin from San Marino honors the accomplishments of both men.

The National Bank of the Republic of Kazakhstan on March 29 released a circulating 50-tenge coin and a noncirculating 500-tenge coin marking Gagarin’s historic adventure, the latest coins in a Space series that began in 2006.

Both versions of the 2011 coin share a reverse design.

An image of the helmeted cosmonaut faces toward the left, with an image of the Vostok-K rocket next to him. The dual dates 1961-2011 also appear, with the Vostok 3KA orbital capsule above in a circular orbit heading toward a field of stars.

Russian and Kazak legends appear about the outer ring, separated by Gagarin’s signature.

Gagarin reportedly spent 108 minutes in one orbit around the earth before falling to earth, separating from the orbital vessel and parachuting to the ground.

The flight launched from Baikonur Cosmodrome, in what is now the Republic of Kazakhstan. Kazakhstan was one of the Soviet Socialist republics until the end of the Cold War.

All the coins in the Space series share common obverses.

They show a composition representing man’s unity with the universe. The face value (either 50 or 500 tenge) appears with the inscription “Republic of Kazakhstan” shown in English and Kazakh.

The Proof 500-tenge coin is a ringed-bimetallic piece, with an outer ring made of .925 fine silver and an inner core composed of tantalum, a rare, hard, blue-gray metal highly resistant to corrosion and highly conductive of heat and electricity. Tantalum is a critical metal used in space programs.

The silver portion weighs 16.7 grams and the tantalum part weighs 24 grams, for a total weight of 40.7 grams.

The coin measures 38.61 millimeters in diameter and has a mintage limit of 5,000 pieces.

The Uncirculated 50-tenge coin (with a face value of 34 cents U.S.) is composed of white German silver, according to the National Bank of the Republic of Kazakhstan.

Collectors will have to search the secondary market as no world coin distributor has yet confirmed carrying the coins of Kazakhstan.

San Marino’s first €5 coin for 2011 celebrates the Soviet and American space triumphs of 1961.

According to Shepard’s 1998 obituary at CNN.com, “His 15-minute, 302-mile flight on May 5, 1961, may now seem a mere footnote in the lengthening history of the American space program. But it was a major accomplishment and came at a time when doubts abounded.”

The United States had hoped to be the first to launch a man into space, but lost that battle. In the shadow of Soviet success, a successful Shepard flight was even more important to exhibit that America could keep up in the contentious race. Shepard’s flight was successful though it was a suborbital flight rather than an orbital mission.

The Proof .925 fine silver coin, released March 8, depicts both men on the reverse, in a design by Valeria De Seta.

A close-up composition of the two men and Gagarin’s Vostok 3KA spacecraft and Shepard’s Mercury capsule called Freedom 7 appear in the foreground, with Earth in the background.

The names gagarin and shepard are inscribed around the earth, separated by the denomination. The dual dates 1961-2011 appear below. The artist’s name v.de seta and the R Mint mark for the Italian Mint (where the coin was struck) also appear on the reverse.

The obverse shows Guata Castle, which is perched atop Mount Titano in Borgo Maggiore, the second-largest city in San Marino. The fortress appears against a backdrop of the earth, with legends republica di san marino surrounding it. The artist’s name a. masini (for designer Annalisa Masini) also appears.

The coin weighs 18 grams, measures 32 millimeters in diameter and has a mintage limit of 48,000 pieces.

It retails for €41 plus €5.50 shipping from the Azienda Autonoma Di Stato Filatelica & Numismatica, the state agency of philatelics and numismatics.