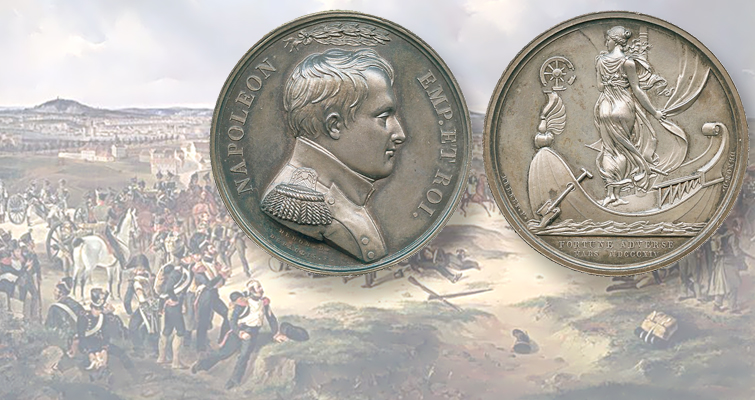 An 1814 silver medal marks Napoleon Bonaparte’s loss during the Battle of Paris.

No subject may be more memorialized and honored in medallic art than Napoleon Bonaparte. Whether celebrating his abundant accomplishments or occasional defeats, thousands of medals feature the emperor of France.

A silver medal marking his capitulation at the Battle of Paris was a highlight of A.H. Baldwin & Sons Ltd.’s June 23 Military auction No. 5 in London. In this bicentennial year of the decisive Battle of Waterloo, the auction featured pieces related to the Duke of Wellington, Napoleon and the Napoleonic Wars.

The designs for the 1814 silver medal for the Capitulation of Paris were by Alexis Joseph Depaulis and Nicholas Guy Antoine Brenet.

The medal features the defeated leader on the obverse, facing right, wearing his uniform, with laurels above.

The reverse of the medal depicts the goddess Fortune standing in an ancient galley, contrary winds in her sails. The rudder of the ship is broken and there is a broken wheel in the upper left field. The legend FORTUNE ADVERSE MARS appears below the exergue and, taken with the design elements, reflects the turn of Napoleon’s fortune with the defeat in Paris.

The medal weighs 45.3 grams and measures 41 millimeters in diameter. The auction house described it as “virtually Mint State.”

There are many Napoleon-related coins and medals. Coin World covers them for you!

Napoleon and Wellington: The Iron Duke's victory over the Little Corporal portrayed on 19th century medal