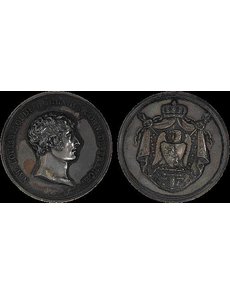 During 1806, the Emperor Napoleon was nearing the apex of his career and his conquests allowed him to bestow crowns and thrones on his loyal followers and relatives.

Medals were soon struck honoring these newly crowned heads. One of these medals is related to the short-lived Kingdom of Holland, bestowed on Napoleon’s neurotic younger brother, Louis, whom the emperor regarded as a budding military genius who needed only to apply himself to become one of the leading soldiers and rulers of the new Europe.

Most historians agree that Louis, renamed Napoleon Lodewijk as king of Holland, was mentally ill.

Louis formed an obsessive attachment to Holland, defying his brother’s orders against commerce with England. In 1802, he had married the vivacious Hortense de Beauharnais and had two sons, one the future Emperor Napoleon III. The marriage was a disaster, ending in separation.

None of this is apparent from the 50-millimeter silver medal bearing Louis’ youthful head and title NAP. LOUIS I. ROI DE HOLLANDE CONN. DE FRANCE (Napoleon Louis, King of Holland, Constable of France). The reverse presents the new kingdom’s arms on mantle: the Dutch lion on a large shield before the Bonaparte eagle, topped by the royal crown of the Bourbons.

Crossed behind are two scepters, tipped by the Main de Justice (Hand of Justice) and the lion of the old Dutch Republic.

The ornate collars of the French Legion d’Honneur and Toison d’or, Golden Fleece circle the devices and behind them is the sword of the Constable of France.

The obverse bears the name of French engraver GEORGE, described by Leonard Forrer in his  Biographical Dictionary of Medallists, as replacing the aged Johan Georg Holtzhey at the Utrecht Mint. George designed other Napoleonic medals and the royal Orders of Holland.

This design raises questions: “Constable of France” was an old royal title revived by Napoleon, but use of the old crown of the Bourbons should have raised eyebrows. The mantle is speckled with ermine tails, not French imperial bees.

In 1806, the Golden Fleece was either an Austrian imperial or Spanish royal decoration. Louis cozied up to Napoleon’s enemy and father-in-law Austrian Emperor Franz I, and in 1809 took refuge in his dominions after abdicating as king of Holland but it is hard to imagine him receiving the Golden Fleece three years earlier.

The medal illustrated was struck at the Paris Mint with the Antique Lamp edgemark used from 1832 to 1841, after the fall of the restored Bourbons. The medal is still available in bronze today.