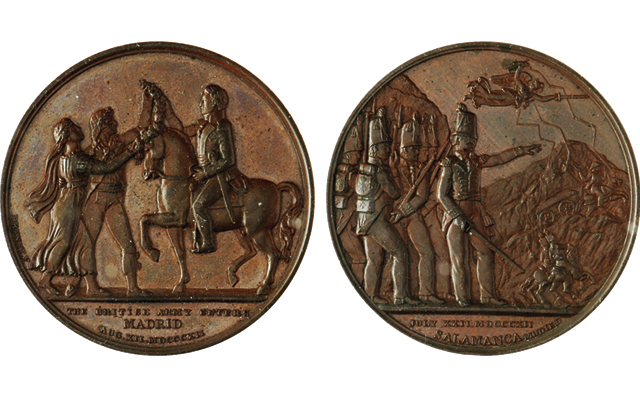 The exploits of Napoleon Bonaparte as artillery officer, conquering general, first consul of the republic and emperor of the French were recorded in a steady stream of medals, including this one.

The world of the medal in the early 19th century was solidly dominated by French artists.

The exploits of Napoleon Bonaparte as artillery officer, conquering general, first consul of the republic, and emperor of the French were recorded in a steady stream of medals. These recalled the earlier official medallic history of King Louis XIV.

These artists had to possess amazing flexibility, many serving King Louis XVI before he went to the guillotine, the First Republic, Consulate and Empire.

Even greater agility was required in 1814 and 1815. Napoleon was dethroned; Bourbon King Louis XVIII was restored, only to have Napoleon return from Elba for the Hundred Days; Louis XVIII fled and returned after the emperor’s final defeat and exile in 1815. The ultimate flexibility was displayed by the French medalists whose work became part of the great project of English publisher James Mudie, who was described by Leonard Forrer in his Biographical Dictionary of Medallists as an “Issuer of a series of medals, styled ‘National Medals,’ commemorating British Victories over the French, under the reign of George III ... to which various British and foreign artists contributed ...” (Forrer IV:186).

Among them was Nicolas Guy Antoine Brenet, creator of more than 50 Napoleonic medals under the direction of Dominique Vivant Denon. Among Brenet’s contributions to Mudie’s series was the 41-millimeter medal marking the decisive July 22, 1812, victory in the Battle of Salamanca and the British seizure of Madrid on Aug. 12.

The obverse shows a winged victory urging on British troops toward the mountains following the rout of French Marshal Marmont’s division, clearing the road to Madrid. Hero of these victories was Arthur Duke of Wellington, shown on horseback entering the Spanish capital, welcomed by a jubilant Spanish couple. The “Iron Duke” would march on until Napoleon’s ultimate defeat at Waterloo.

Though designed by Brenet, this medal has little of the muscular smoothness of his Napoleonic works. The British troops show the rigidity of toy soldiers and the stiffly upright Wellington appears to dwarf his mount.

Forty medals comprise the Mudie series, known today in silver and bronze, occasionally in white medal and rarely in gold. All are described in Lawrence Brown’s British Historical Medals, Volume I. These medals make a fascinating counterpoint or companion to the Napoleonic series.