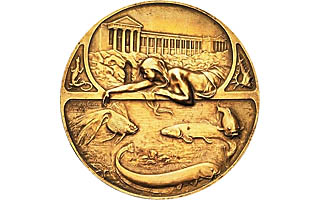 Zoos may be known for animals like polar bears, penguins and elephants, but aquatic animals are often on display. Belgium’s Antwerp Zoo opened an aquatic exhibit in 1911, giving the theme to this beautiful medal. 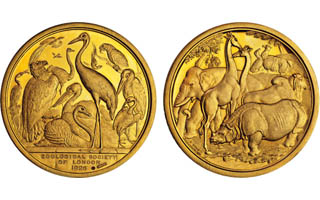 One of the most beautiful assemblages of animals appears on the London Zoological Society medal. Limited numbers in three versions have been issued over the course of nearly two centuries, including only five pieces produced in gold.

Several medals feature the beauty and grandeur of wildlife and zoos and are available for collectors.

One of the oldest such medal comes from the Amsterdam Zoo, which opened in 1838.

In 1888, for its 50th anniversary, a bronze medal was issued with an obverse design populated by a lion, tiger and elephant. Today the zoo is much more than the standard warehouse of animals, having an aquarium and a planetarium for guests also to enjoy.

Just a few years later, the Antwerp Zoo was established in Belgium’s capital city in 1843.

Zoos continually refine their presentations about and collections of wildlife, adding areas that might be popular with visitors.

In 1911, a bronze medal was issued to celebrate the opening of the Antwerp Zoo’s aquarium and reptile gallery. Unlike so many zoo coins and medals, this elegant work highlights its aquatic offerings and, at 64 millimeters in diameter, to a stunning effect.

Perhaps the most successfully executed menagerie is seen on the 1826 medal of the Zoological Society of London.

Designed by famed medalist and artist Benjamin Wyon (after Thomas Landseer), both sides of the medal are filled with animals, save for the society’s name, the year and the names of the artists. Twelve birds appear on the obverse and seven animals are on the reverse.

Very limited numbers of the medals have been issued over the years as needed for awards — only five in gold, 59 in silver and 22 in bronze, according to a 1957 list cited by Christopher Eimer in his 2010 magnum opus, British Commemorative Medals and their Values (no more recent list is available).