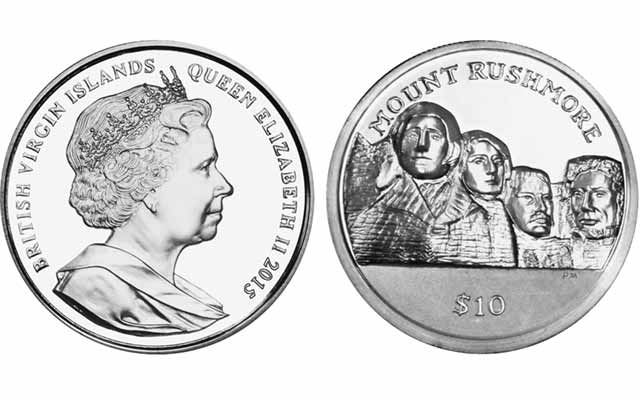 A 2015 Proof silver $10 coin from the British Virgin Islands celebrates the Mount Rushmore National Monument with a concave reverse surface having an ultra-high relief design.

The Pobjoy Mint’s newest coin represents a new low — and a new high — in coining technology for the mint.

According to Beth Caspar, director of U.S. sales and operations for the Pobjoy Mint, “Dished is like a bowl. It is scooped down and then still raised as an Ultra High Relief, thus making it even more dramatic.”

This is the first time the Pobjoy Mint has issued a concave coin.

The obverse of the coin, which features an effigy of Queen Elizabeth II by Ian Rank-Broadley, is a standard "flat" or level depth and is not convex.

The coin is issued on behalf of the British Virgin Islands government.  The coin also commemorates the 150th anniversary of the assassination of President Abraham Lincoln.

Construction started on the memorial in 1927 and the president’s faces were completed between 1934 and 1939. Mount Rushmore has become an iconic symbol of presidential greatness and attracts nearly three million visitors every year.

To replicate the setting of the monument within the mountains, the ultra high relief coin was produced with the sculptures of the four famous American presidents rising above the dished surface.

Each of the coins weigh 31.103 grams and measures 30 millimeters in diameter.

Each coin is presented in a walnut-effect box.

The Mount Rushmore coin has a mintage limit of 1,999 pieces and retails for $329.

Want to read about more Pobjoy Mint coins? Coin World has you covered!