Money, with a little luck 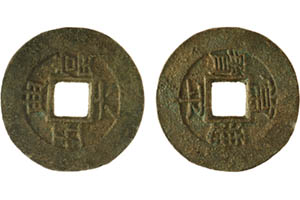 All donut-shaped cash coins are considered lucky, including this 1883 Korean 5-mun example. Korean cash are easy to distinguish from those of other Asian nations due to their extra wide smooth rims. , 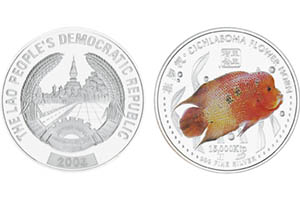 A mint-colored silver coin featuring the very lucky flower horn cichli aquarium fish, the 15,000-kip piece from Laos, has a latent date that shifts back and forth between 2003 and 2004. 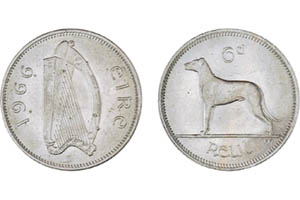 The Irish sixpence, obsolete since the late 1960s is a lucky coin type from a lucky nation. 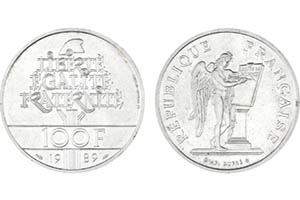 Napoleon was finally defeated at Waterloo because, so says the legend, he lost his lucky Angel coin the day before the battle. This 1989 Angel from France is a modern incarnation of the famously lucky coin. 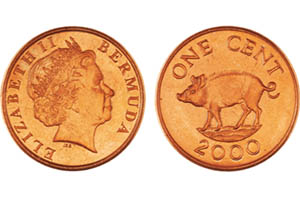 Cents and their equivalents are called lucky in many cultures, including Bermuda, where the "Hogge" cent reflects a porcine-rich history. 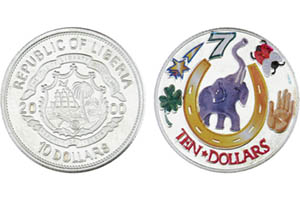 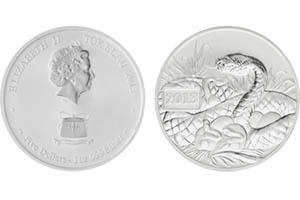 Snakes are lucky animals in the East. 2013, the Year of the Snake on the Chinese Lunar Calendar, produced many lucky snake coins, like this $5 silver bullion piece from Tokelau, in Reverse Proof. 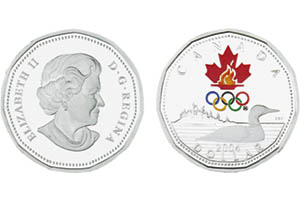 Here's an RCM-colored Canadian dollar coin so lucky that the word is part of its name, as in the "Lucky Loonie."

Each nation has its own cultural superstitions regarding luck, and coins are a popular instrument of expression for them.

In the United States and Europe, for example, cents and cent-equivalent coins are considered lucky by some, and coins of all denominations are tossed into fountains to ensure that wishes come true.

In France, the luckiest of coins is the French Angel, which has been minted off and on in various metals since Augustin Dupre (1748 to 1833) designed it in 1792. When Dupre’s politics angered King Louis XVI, legend has it that it was one of his own lucky Angel coins that saved him from the guillotine. In one version of the story he was able to escape prison because his lucky pocket piece produced a distracting lightning storm, while other another version says he used the coin to bribe a guard.

In 1989 France issued a Lucky Angel silver 100-franc coin to commemorate human rights. The angel depicted on the coin is inscribing the term DROITS DE L’HOMME on the plaque in front of him. These and other Angels are carried by many Europeans to this day, especially pilots.

Sometimes it is the coin type and not the design that’s lucky. All cash coins — the ones that are round on the outside and have a square hole in the middle — are considered lucky. Korean cash were cast from 1633 until 1892. Today the Korean pieces and the obsolete cash of China, Japan and Vietnam are used by practitioners of the ancient interior design system called “feng shui.” The practitioners hang them from ceilings with lucky red thread to bring prosperity to a home.

The pig is one of the oldest symbols found on New World coins and tokens. Pigs introduced to the Bermuda islands in the 1500s by the Spanish flourished and helped feed future visitors. Bermuda’s much later Pig penny or more accurately, Hog cent, minted since 1970, is based on a 17th century design from the island’s “Hogge money” history. It is considered to be a very lucky piggy.

Many brides, whether of Irish descent or not, put a sixpence in a shoe on their wedding day for good luck. All over America to this day, these obsolete coins sell briskly during St. Patrick’s Day celebrations in the form of key-chains, money clips and coin jewelry.

Flowerhorn cichlids are ornamental aquarium fish noted for their bright colors and the luck that their protruding foreheads purportedly generate.

The Lao Lucky Flowerhorn Fish 15,000-kip coin has a latent date that shifts back and forth between 2003 and 2004. Laos has issued several coins having this feature and other lucky aquarium denizens like the dragonfish, because the next best thing to owning the real thing is having a colorful representation of it.

In Canada, the Lucky Maple Leaf cent has been eclipsed by the Lucky Loonie dollar coin. Some believers in lucky coins attribute the 2002 Olympic gold medal wins at Salt Lake City by the Canadian men and women’s hockey teams in part to a Canadian dollar buried in the ice at the center of the rink.

Lucky Loonie dollars have been minted regularly since 2004. Every Canadian Olympian in Sochi this year was given a 2014 Lucky Loonie to carry. Both the men and the women won hockey gold.

The Royal Canadian Mint sent a 2014 Lucky Loonie displayed in a special commemorative frame to each medalist’s hometown to highlight the performances the athletes delivered during the Sochi Games.

Liberia took no chances in 2000, opting to cover its mint-colored $10 lucky commemorative with seven different international lucky talismans: elephant with trunk raised, four-leaf clover, shooting star, lucky No. 7, horseshoe, hamsa hand and ladybug beetle. In spite of the fact that these coins were never meant to circulate, some people carry them into casinos as lucky pocket pieces.

Snakes are typically viewed in a negative light in the West but are very lucky in the East. The year 2013, the Year of the Snake on the Chinese Lunar Calendar, saw the release of many lucky snake coins like the illustrated Reverse Proof $5 bullion silver piece from Tokelau. Tiny Tokelau, a New Zealand territory, is issuing silver bullion coins for each animal in the Chinese zodiac, including for the current Year of the Horse.

World mints love to pander to our superstitious natures so there are many coins with lucky symbols available to collectors. Carrying a lucky coin in our pockets is easy, and whether it works or not, it remains one more fun thing to do with world coins.