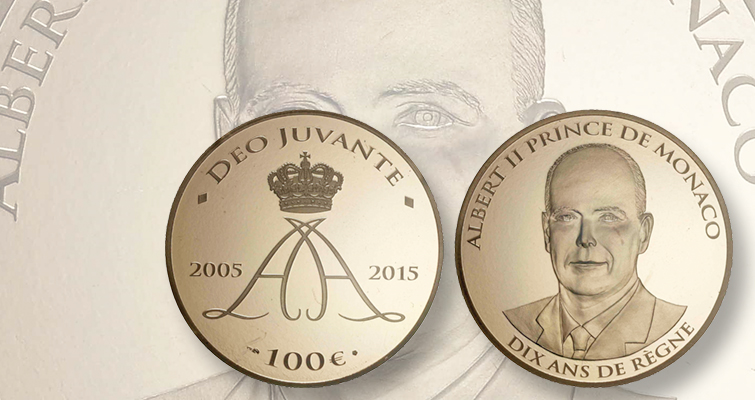 Monaco’s first gold coin since 2008 has a small mintage of 499 pieces and is selling fast. The coin honors the 10th anniversary of Prince Albert II’s reign.

One side of the coin shows the royal monogram of two intertwined A’s below a crown, flanked by the dual dates of the prince’s reign, 2005 and 2015. The motto DEO JUVANTE (translating to “with God’s help”) appears above the monograph and the denomination of €100 appears below.

A front-facing effigy of Prince Albert II appears on the coin’s other side. The inscription ALBERT II PRINCE DE MONACO appears above the portrait, along with DIX ANS DE REGNE (“ten years of reign”) is found below.

The coin was struck by the Monnaie de Paris for Monaco, and the 32.25-gram weight mirrors the weight of the 100-franc gold coin issued under the Napoleonic monetary system.

The €100 coin was released in late July and has a mintage limit of 499 pieces. According to Federico Pastrone of coin dealer/auction firm Gadoury, the coin is selling “very fast” and is expected to sell out soon.

To order the coin in the United States, visit the distributor website, www.coin-currency.com.

Albert II is the son of Prince Rainier III and Grace Kelly, the Academy Award Winning American actress who married Prince Rainier in 1955 after meeting him at Cannes.

Prince Rainier III died in 2005, not long after his son was named regent because of his father’s illness. The current prince’s mother died in 1982, having suffered a stroke while driving a car and experiencing an accident.