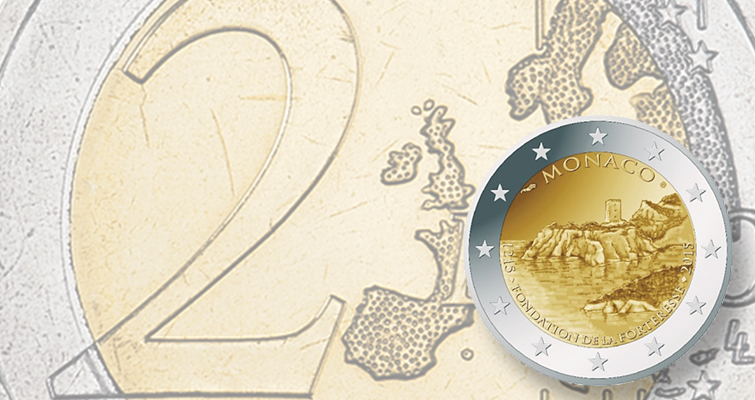 Monaco on Nov. 1 issued a commemorative €2 coin celebrating the 800th anniversary of the castle, which now serves as the Prince’s Palace.

Images courtesy of the European Union.

Monaco on Nov. 1 issued a circulating commemorative €2 coin to celebrate the 800th anniversary of the castle fortress rising about the skyline. The fort now serves as the Prince’s Palace.

The coin has been confirmed with a notice in the Official Journal of the European Union.

The obverse of the coin shows a tower on the top of the rock. At the top the name of the issuing country, MONACO, is flanked by the Mint mark of the Monnaie de Paris, and the mintmaster mark. At the bottom is the inscription FONDATION DE LA FORTERESSE (meaning "foundation of the fortress"), flanked by the years 1215 and 2015.

According to the official history published by the press office of the Prince's Palace of Monaco, “The palace began as a fortress in 1191 when the German Emperor Henry IV ceded the harbor and the rocky promontory to the Republic of Genoa on the condition that they build fortifications to combat piracy. Additional property was acquired from the Council of Peille and the monks at the Abbaye de Saint Pons and construction finally began in June 1215 when Fulco de Castello, one of Genoa's most enterprising consuls, anchored his fleet of ships loaded with building supplies in the harbor. By then they were ready to trace the outlines of a rampart of thirty-seven sections and four buttressed towers connected ... to form a triangular boundary. Later a higher wall was erected and a second fortress was added on the port side entrance, none of which remains today.”

WHAT IS YOUR EURO WORTH? Coin World tells you!

Monaco’s €2 coins are perennial winners, with low mintages and limited access for the popular coin series, leading to strong prices in the aftermarket. Though the country's euro coins circulate on a limited basis, the commemorative €2 coins are snapped up immediately and sold into the collector market.

Monaco issued what may be the most expensive €2 coin ever, the 2007 coin marking the 25th anniversary of the death of Princess Grace, which has a mintage of 20,001 pieces and retails for about $1,900 U.S., as recorded in Coin World’s Coin Values.

The ringed-bimetallic €2 coin has the same specifications as standard circulating versions, and features the 12 stars of the European flag inside the coin’s outer ring.