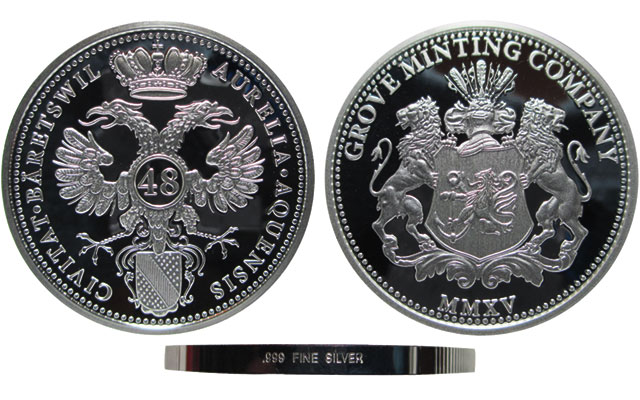 A modern silver medal from Grove Minting is the second striking in the private issuer's 2015 Thaler series.

This Proof "48 schilling" medal features a design from the 1700’s but was struck with modern manufacturing techniques. The medal showcases a heraldic eagle on the obverse with family regions of Bäretswil and Baden designated in Latin.

The reverse portrays the Grove Minting coat of arms and crest supported by lion pillars. The top edge is assayed “.999 Fine Silver."

This commemorative medal integrates design interpretations from historic coins and other sources in Baden, Lubeck, Hamburg, and Nurnberg. A version in brass with the same designs was the first issue in the series.

A total of 250 silver pieces have been struck, with 500 pieces advertised as the mintage limit; additional medals can be struck up to that amount if the first 250 are sold.

The medal is being offered for $40 at the Grove Minting website.