Several private and official replica Waterloo Medals are available in the marketplace for collectors desiring examples of Pistrucci’s masterpiece. 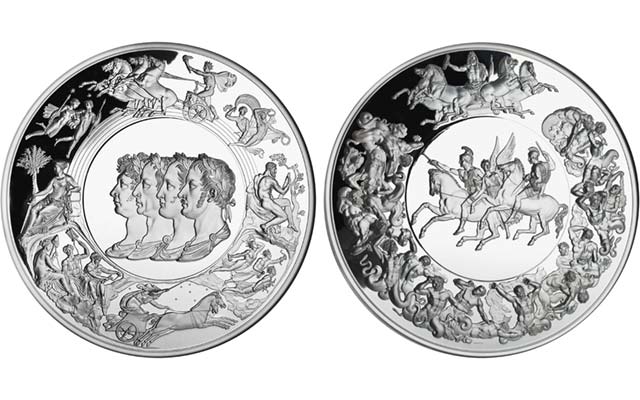 A total of 2,015 silver medals struck to the 139-millimeter size that Benedetto Pistrucci intended are being offered through London Mint Office for £3,900 each. The project brings to life the efforts of a tortured genius in a manner never before realized. 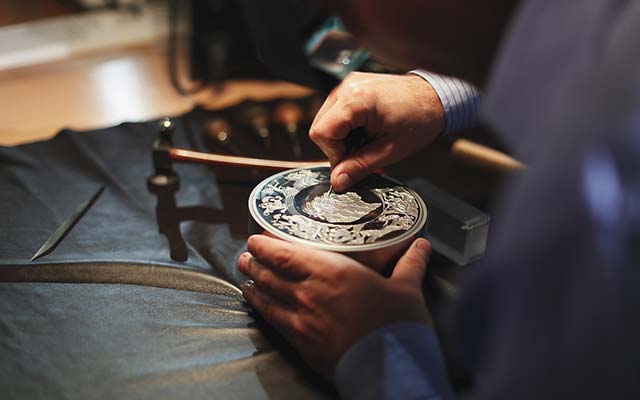 An unnamed technician at Worcester Medal Services works on dies used to create Waterloo Medals in 2015 for the bicentennial of the battle.

The following is the final segment from a feature article appearing in the June 2015 issue of Coin World Monthly:

Read earlier pieces of the feature:

In some respects the Waterloo Medal can still be considered incomplete. The dies are more than 5 inches in diameter, and are considered too large to be safely hardened for use, although impressions of the work have been made in soft metal or by electrotype and been sold by the Royal Mint.

In 1991, the Royal Mint decided to strike 63-millimeter replicas of the medal in gold, silver and bronze on the 175th anniversary of the Battle of Waterloo.

To mark the 200th anniversary of the battle, multiple versions have been issued by a private firm.

London Mint Office, a division of European coin distributor SamlerHuset, has issued 12 versions total of six different Napoleonic medals, including the Waterloo Medal in three versions. Their issue is being coordinated through the U.K. government’s official Waterloo 200 anniversary celebrations and Worcester Medal Services (which created the official Diamond Jubilee medals for Queen Elizabeth II in 2012).

The London Mint Office’s silver-plated base metal Waterloo Medal weighs 400 grams, measures 88.9 millimeters in diameter and has a mintage limit of 1,815 pieces. These are sold for £297 each.

A gold-plated base metal version with the same weight and diameter is limited to a mintage of 2,015 pieces. The price for this medal is unavailable.

A third Waterloo Medal from the London Mint Office measures 139 millimeters in diameter, the exact size intended for the original. The .999 fine silver medal weighs 2 kilograms and has a mintage limit of 2,000 pieces. Its price is set at £3,900 each.

An unspecified percentage of the revenue from all Waterloo medal sales by London Mint Office is donated to Waterloo 200 to fund its activities, the firm said.

In addition, Guy Trouveroy, Belgian ambassador, and Margriet Leemhuis, deputy head of mission at the Dutch Embassy, each received a commemorative silver Waterloo Campaign Medal on behalf of their respective country for the essential roles their nations also played in the Battle of Waterloo.

A supersized replica of the Campaign Medal is the centerpiece of a new memorial to be unveiled June 10 at Waterloo Station in London.

The lasting legacy of the Battle of Waterloo is visible on any map of modern Europe, with the divisions carved out by that fateful conclusion to decades of war.

The Waterloo Medal remains a fitting reminder of the wages of war, and the groundbreaking artistic effort celebrating the battle.