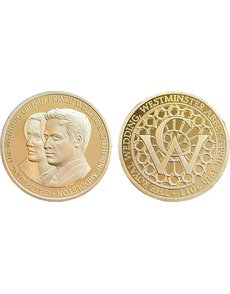 Images courtesy of the Birmingham Mint. 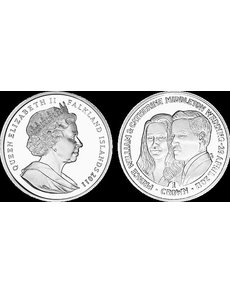 The Pobjoy Mint is commemorating the royal wedding with coins for the Falkland Islands. The crown coins share a common design of Prince William and Catherine Middleton. 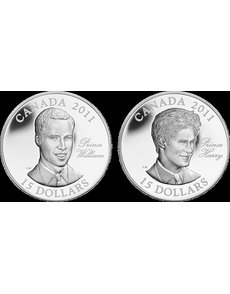 The roster of coins commemorating the April 29 royal wedding of Britain’s Prince William to Catherine Middleton is growing ever longer.

The Royal Canadian Mint on March 2 confirmed its plans to celebrate the wedding with commemorative coins.

In addition, two private minters in the United Kingdom have released plans for commemorative coins and medals, respectively. Pobjoy Mint officials on Feb. 28 announced that the mint would strike coins for the Falkland Islands, and the Birmingham Mint recently revealed the design of medals marking the nuptials.

RCM officials have revealed scant information about Canada’s wedding commemorative coins, except the promise that the “beautifully designed” coins will include an “eye-catching technological feature.”

RCM officials were slated to announce March 7 a sort of companion series of commemorative coins that will make its debut with Prince William. He and his brother, Harry, are featured on the first two coins from the Continuity of the Crown series. Their father, Prince Charles, will be depicted on the third and final coin in the series.

The Continuity of the Crown series is being released over the next several months in the lead-up to 2012, when Queen Elizabeth II will mark the 60th anniversary of her accession to the throne.

The Prooflike .925 fine silver $15 coins are intended to resemble a medallic issue.

According to the RCM, each coin is “hand-polished and quadruple struck. Slight inconsistencies in the quality of the surface are normal for this ultra-high relief process.”

Each of the first two coins will feature one of the princes on the reverse, in designs by Canadian artist Laurie McGaw.

Queen Elizabeth II, who is featured on the obverse in the Susanna Blunt effigy, approved the designs, according to the RCM.

Both the William and Harry coins have a mintage limit of 10,000 pieces.

They are being issued March 15 with an issue price of $109.95 each and are available individually or in a three-coin subscription, which includes a free clam-shell case for all three coins.

The Prince Charles coin in the series is due for release in September.

A variety of coins marking the Queen’s Diamond Jubilee will be released beginning in May.

Collectors can sign up at a special page on the Web site www.mint.ca/royal for updates about future royal-themed coins.

The U.S. prices for collectors in the United States buying directly from the RCM will fluctuate with the exchange rate, calculated at the time of purchase.

The design was approved by both the Clarence House (representing Prince William) and Buckingham Palace (for the queen).

The copper-nickel and silver versions each weigh 28.28 grams and measure 38.6 millimeters, while the gold coin weighs 0.50 gram and measures 11 millimeters in diameter.

The copper-nickel coin has an unlimited mintage and sells for $15. Both silver and gold coins have a mintage limit of 10,000 pieces; the silver coin retails for $70 and the gold coin costs $109.

The Birmingham Mint in England has a storied history of coinage production, stretching back to 1794.

The privately held mint, a successor to the historic entity of the same name, produces medals for sporting events and many private issuers, according to Angus Law, managing director of the Birmingham Mint under current ownership. The current owners bought the business in 2003 when the business became insolvent.

Its latest venture is a medal designed by Andrew Cummins to mark the royal wedding.

The obverse of the medal depicts a three-quarters profile portrait of the couple in a scene that the Daily Mail said was “a bit generous with the prince’s hairline.”

The reverse reflects the location of the wedding — Westminster Abbey — both directly stated in the legend and suggested by the design behind the couple’s c and w initials. The background design resembles framing in one of the church’s famed stained glass windows.

The medal is offered in four versions, all measuring 38.61 millimeters in diameter.

Pricing and mintage figures have not been established. The Birmingham Mint will soon announce a U.S. distributor.