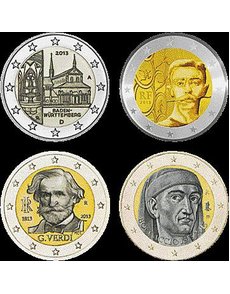 Germany, France and Italy are among the nations celebrating historic events, people and places with circulating commemorative €2 coins in 2013.

Many mints are exercising their option to issue two circulating commemorative €2 coins per year (instead of the previous limit of one), after a change in eurozone regulations that took place last summer.

Among those issuing two coins are Germany, France and Italy. Spain and Slovenia’s themes and images were already announced (Coin World, Nov. 19 issue).

Germany continues its annual series honoring the 16 states of the federal republic with a coin honoring Baden-Württemberg. The series began in 2006.

Released Feb. 1, the coin depicts the Maulbronn Monastery, a UNESCO Heritage site that is reportedly the best-preserved medieval Cistercian monastery complex in Europe. The 2013 coin has a mintage limit of 30 million pieces and is struck at all five German mint facilities. Examples bear one of five Mint marks: A, Berlin; D, Munich; F, Stuttgart; G, Karlsruhe; or J, Hamburg.

That coin followed Germany’s Jan. 22 release of a circulating commemorative €2 coin in a joint issue with France, itself a historical event, being the first time two eurozone countries have issued a coin around the same theme that was not being celebrated across all 17 Eurozone members. The coins celebrate the 50th anniversary of the post-World War II Elysee Treaty, or Treaty of Friendship.

The German version is struck at each of the five German mint facilities and bears one of the five different Mint marks, and the letter D representing Deutschland. RF appears instead of the D on the French version to represent Republic Francaise.

France’s other circulating commemorative €2 coin for 2013 will celebrate the 150th birth anniversary of Pierre de Coubertin, the father of the modern Olympics. It will have a mintage limit of 1 million pieces and is due for release June 3.

Mintage and release dates are unavailable for the Italian coins.

Portugal has confirmed plans to celebrate the 250 anniversary of the Torre dos Clérigos tower at the Clérigos Church in Porto, Portugal. In total, 500,000 €2 coins of Portugal are due for release in June.

All €2 coins are ringed-bimetallic pieces with a copper-nickel ring and nickel-brass center. Each weighs 8.5 grams and measures 25.75 millimeters in diameter. ¦