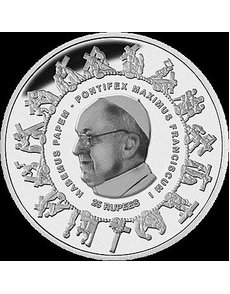 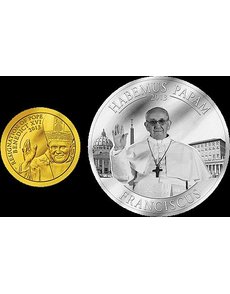 New coins from the Cook Islands and a private minter celebrate the resignation of Pope Benedict XVI and the election of Pope Francis.

Faster than you can say “pontificate,” two private mints announced plans to commemorate the election of Pope Francis with coins.

The reverse (common for all the coins) shows the new pope waving while at St. Peter’s Basilica on March 13. The Latin phrase habemus papam (meaning “we have a pope”) appears with his name in Latin, franciscus, and the year.

The specifications for the Cook Islands’ Pope Francis coins are the same as for coins issued a few weeks earlier upon the resignation announcement of Pope Benedict XVI. Those show the now pope emeritus waving, with the copper and silver coins also showing him holding the Twisted Cross.

The Seychelles coins show a shared design of Pope Francis surrounded by the 14 Stations of the Cross, a popular Catholic devotion to indicate the passion and death of Jesus Christ; rosary beads used while undertaking the stations create a circle around the portrait.

All of the coins measure 38.6 millimeters in diameter.