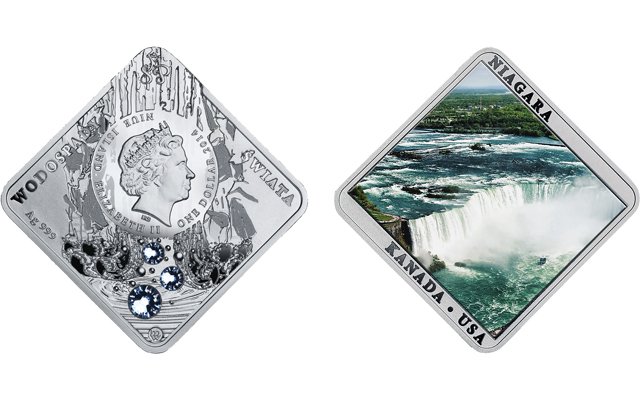 The Mint of Poland honors Niagara Falls in the United States and Canada with a colorful Proof silver dollar. 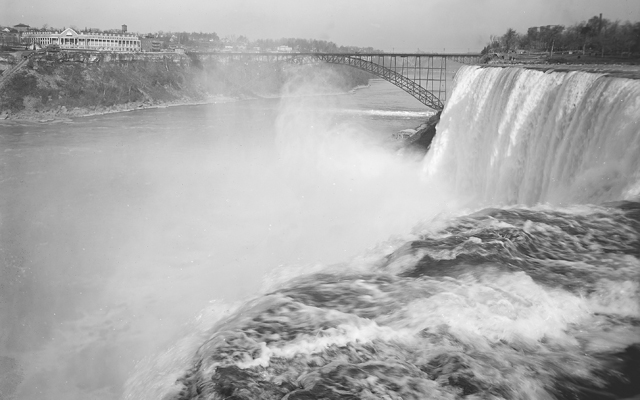 A vintage scene from circa 1901 to 1910 shows the American Falls with the Clifton Hotel in the background.

Niagara Falls in Canada and the United States is featured on a new Proof .999 fine silver dollar for Niue.

The Mint of Poland has issued the colorful diamond-shaped coin, which features digital printing and Swarovski crystals.

The waterfalls of Niagara Falls are located on the Niagara River, which connects two of the five Great Lakes, Erie and Ontario. Niagara Falls is composed of three separate waterfalls: American Falls, Bridal Veil Falls and Horseshoe Falls.

The first European to "discover" the falls was French explorer Father Louis Hennepin in December 1678. The Niagara region soon became a French stronghold, as Frence forces built forts at the mouth of the Niagara River, which is now modern day Old Fort Niagara.

Niagara Falls was the birthplace of commercial hydroelectric power. In the city of Niagara Falls, N.Y., Nikola Tesla developed the alternating current system, which allowed for the transmission of power generated along the Niagara River to homes and businesses. In 1895, one of the world’s first commercial hydropower plants was constructed.

Details of the coin

The obverse of the coin shows the Ian Rank-Broadley effigy of Queen Elizabeth II, with various inscriptions naming the issuer, denomination, queen and year of issue. Three Swarovski crystals appear below, and the metal fineness and Mint of Poland logo are also inscribed.

A generic waterfall is depicted in the background, with the name of the coin series in Polish, Wodospady Wiata, meaning “Waterfalls of the World.”

The name of the waterfall and the border countries defined by the river also are included.

The coin weighs 15 grams and measures 28.2 millimeters on each side. It has a mintage limit of 2,014 pieces and each is accompanied by a certificate of authenticity.