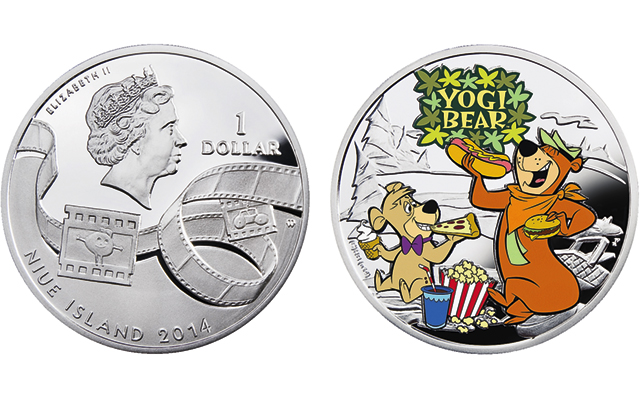 Yogi Bear and his pal Boo-Boo enjoy the contents of a “pic-a-nic” basket “liberated” from a visitor at the fictional Jellystone National Park on this new Proof silver dollar from Niue.

The fictional Jellystone National Park may be miles away — in truth and geography — from Niue Island, but the park’s most recognizable resident now appears on a 2014 coin from that Pacific island nation.

Yogi Bear, the character created by Hanna-Barbera Productions, is the newest honoree of the Mint of Poland’s Cartoon Characters series for Niue, which in the past year has also honored Tweety, Bugs Bunny, and the Flintstones, among others.

Yogi Bear, said to have been modeled after Art Carney’s character Ed Norton from The Honeymooners (and with a name resembling baseball great Yogi Berra), made his debut in 1958 in The Huckleberry Hound Show.

The new Proof .925 fine silver dollar shows a colorful scene of the larcenous ursine with his sidekick Boo-Boo Bear, apparently enjoying the spoils of a stolen “pic-a-nic” basket.

The standard obverse for the series carries a small version of the Ian Rank-Broadley effigy of Queen Elizabeth II, along with a depiction of a segment of a roll of film, and various inscriptions.

Distributor Downies offers the coin for $79 in U.S. funds.