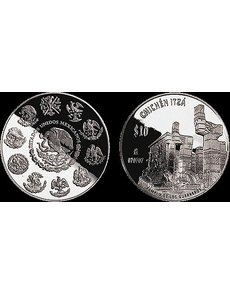 The Temple of Warriors, a grand temple surrounded by carved statues of warriors, is on the two-ounce silver 10-peso coin. 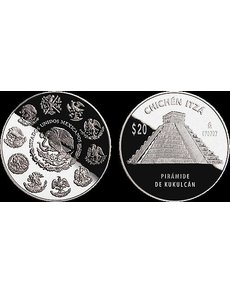 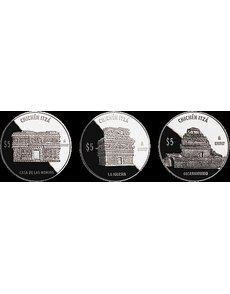 The sacred site on the Yucatán Peninsula, the northernmost of Mayan ruins, was host to the intermingled Mayan and Toltec culture from the 10th to 15th centuries. Ruins of the site were excavated in 1841.

The series of five Proof 2012 .999 fine silver coins marks the July 7, 2007, designation of the site as one of the new seven Wonders of the World in a poll organized by the New7Wonders Foundation, based in Zurich, Switzerland.

The 1-ounce coins show the nunnery (casa de las monjas), the church (la iglesia) and observatory (observatorio) at the site.

The nunnery building and the church are made of stone and feature masks of the god Chaac. The observatory was used for astronomy by members of the Pre-Columbian culture, who are noted for their astronomical knowledge.

The Temple of Warriors (templos de los guerreros) appears on the reverse of the 10-peso coin. The temple is a large stepped pyramid nearly surrounded by carved columns of warriors.

It is named for Kukulcán, a feathered serpent deity, the shadow of which appears along the northern balustrade of the pyramid during every spring and fall equinox. The shadow, formed by a combination of various elements of the pyramid, appears also on the coin.

The obverse side of all five coins bears the current rendition of Mexico’s eagle-on-cactus national emblem (or coat of arms) at the center, surrounded by 10 different smaller eagle-on-cactus emblems used throughout Mexico’s history. The legend ESTADOS UNIDOS MEXICANOS rises above the central emblem.