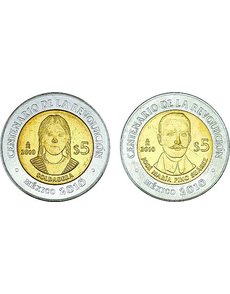 coins from a series marking the Mexican Revolution centennial. 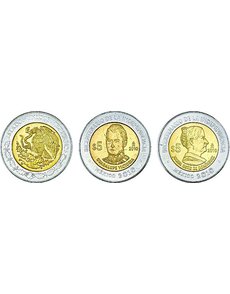 coins from a series marking the Mexican Revolution centennial.

The final five 2010 ringed-bimetallic 5-peso coins from two circulating coin series, commemorating leaders in the Mexican Independence movement and honoring leaders in the Revolution, are now available from a U.S. coin dealer.

The coins conclude the two series of 2008 to 2010 circulating commemorative coins being issued by the Banco de México.

The coins have been entering the U.S. marketplace slowly. Bailey has offered new issues as the pieces enter circulation.

The coins have a face value of about 41 cents U.S.

Ignacio Allende, born in 1779, began on one side of the fight and ended on the other.

Originally part of the army of New Spain, Allende became sympathetic to the cause for independence and supported the underground movement before becoming fully engaged in the struggle.

After Miguel Hidalgo y Costilla’s famous Cry of Dolores ignited the independence movement, Allende was named lieutenant general of the armed forces, with Hidalgo in command.

After some early success (the Siege of Guanajuato), tactical disagreement between Hidalgo and Allende hampered victory.

Allende finally gained command of the forces, which he marched north toward the United States to regroup and, he hoped, find assistance.

Instead, opposing forces — tipped off by a traitor — ambushed and captured Allende and Hidalgo (then in charge of political affairs) and others. They were taken to the city of Chihuahua, where they were tried and executed, Allende on June 26, 1811.

He began fighting for independence forces in 1812 and fought at the assault of Oaxaca.

Success during the assault prompted his change in name and earned him a promotion to lead insurgent troops at Veracruz.

After some defeats, Guadalupe hid in the jungle for almost four years before emerging to rejoin the then-dormant cause.

After de Iturbide was ousted, a triumvirate held the frail reins of power, and in October 1824, Victoria was victorious in the presidential election.

He served as the first president of the newly established republic.

During the independence movement, Josefa Ortiz de Dominguez was part of an intellectual group in Querétaro (including Allende) that pushed for freedom.

Josefa persuaded her husband, Miguel, then a corregidor (magistrate) of Querétaro, to host political meetings among revolutionaries at their house, where much planning occurred.

As the struggle reached its tipping point, colonial authorities visited to roust out insurgents, forcing her husband to conduct a house-by-house search (officials were unaware of his support for the insurgents).

As an outspoken critic of the Spanish overlords, Ortiz was locked up, but still managed to pass word to the mayor, who tipped off the insurgents, allowing their escape and the opportunity for Hidalgo’s famous cry.

Coins of the Revolution

One of the most emblematic images of the Mexican Revolution is “La Soldadera,” a symbol of the women who took arms in the fight.

The term soldaderas includes generally ordinary women who joined the fight, as well as others who were wives of soldiers and who were allowed to travel with the male forces.

They often cooked, hunted for food and performed other chores to support the war effort.

Little is known of individual soldaderas today, but the story of Adelita, a character in a folk song who goes to war to be with the man she loves, is part of the fabric of Mexico’s culture. The term Adelita now signifies a strong woman.

He helped negotiate the Treaty of Ciudad Juárez and was named provisional (and later constitutional) governor of Yucatán.

He left the latter post to become vice president of Mexico (under Francisco Madero) in late 1911 and he was soon also named secretary of education and the arts.

During La decena trágica (the 10 tragic days), Pino Suárez and Madero were forced to resign and were assassinated Feb. 22, 1913.

The center of each ringed-bimetallic piece weighs 3.25 grams and is composed of aluminum-bronze (92 percent copper, 6 percent aluminum and 2 percent nickel). The 3.82-gram outer ring is composed of iron, chrome, nickel, carbon, silicon, manganese, sulfur and phosphorus.

All of the coins in these two series have a common obverse depicting the Mexican national coat of arms. An inscription translating to “United States of Mexico” follows the curve at the top of the coin’s ring and a wreath stretches along the bottom portion.

The center of the reverse of each coin bears the bust and name of the hero commemorated, with the issue date and denomination.

Inscriptions in the outer rings translate to either “Bicentennial of Independence” or “Centennial of the Revolution,” with the commemorative inscription méxico 2010 appearing on all of the coins.