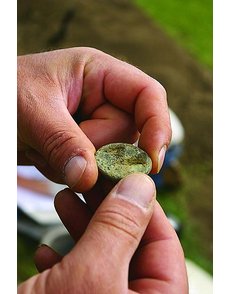 One of the 3,784 coins found in the hoard is examined up close. 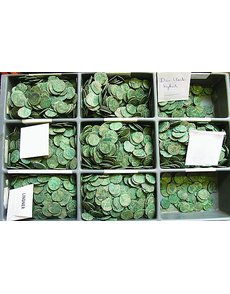 After examination, the Roman coins from the Bredon Hill hoard were sorted. 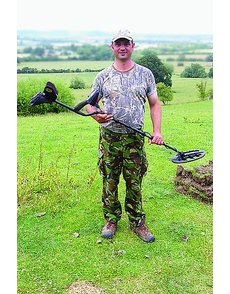 Jethro Carpenter, the metal detectorist who located the Bredon Hill Hoard, will split any proceeds with a friend accompanying him on the June day the hoard was found. The landowner will also receive a share. 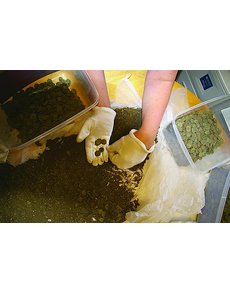 Excavating the hoard took several hours as the two finders completed the task with their hands. 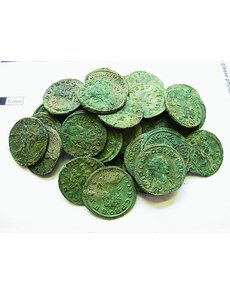 The Bredon Hill hoard represents 16 different emperors across 38 years, and was buried decades after it was amassed, making the hoard of particular interest to authorities.

In a little more than five minutes, a metal detectorist uncovered a hoard hidden for centuries.

In the summer of 2011, a hoard of 3,784 mainly bronze Roman coins was found at Bredon Hill in Worcestershire, a previously unknown Roman site. It is the county’s largest such find and one of national importance.

The hoard is believed to have been buried about A.D. 350, with the coins dating to between a period around A.D. 244 to 282. Experts suggest that the timing of the coins’ burial makes the hoard unique in Britain.

Worcestershire is a county in the English Midlands west of the nation’s second largest city, Birmingham. Bredon (pronounced Breedon) Hill is southwest of Evesham in Evesham Vale. The hill is one of the country’s important wildlife sites and although the small tower at its summit is only mid-18th century, the remains of an Iron Age fort are located nearby, while on the north side are the remains of Elmley Castle, a large medieval fortification.

In the summer of 2011 Jethro Carpenter and Mark Gilmore, two friends from childhood and metal detecting enthusiasts, were enjoying a walk on the hill with their detectors.

In a scenario that is every metal-detectorist’s dream, within minutes of putting the devices to the ground, one of the screens registered “overload” and it was clear that a large find had been discovered. For two hours the duo excavated the area by hand, unearthing coin after coin before appreciating the magnitude of their discovery, and the relevant authorities, the Portable Antiquities Scheme, the coroner for Worcestershire and the landowner, were alerted to the find.

Carpenter, 43, remarked at the press conference held in Worcestershire on Oct. 21: “As a child you watch pirate films and dream of finding buried treasure being uncovered in chests but the truth is that as a metal detector enthusiast you can hunt for months on end and find nothing so much as a dropped penny. I’ve known the Bredon Hill area for more than 20 years and taken my detector there countless times so never in a million years did I expect to come across such a find. On the day of the discovery, my detector was down for no more than five minutes when it started to make a high-pitched noise, indicating a lot of buried metal below foot. Even more excitingly, the screen flashed up ‘overload.’ Mark and I started digging and uncovered coin after coin. It was so exciting, my heart was racing as they just kept on appearing and I could see the head of an emperor visible indicating they were Roman. This find offers a window into a completely different world and it makes you wonder ‘who buried these coins and why?’ It’s amazing that the Museums Service, archaeology experts and metal detectorists can work together to try and help us piece together this jigsaw.”

Gilmore, 47, was 50 feet away when the find was made but shared in the excitement.

“When Jethro called me over, I dug down and found a bit of pottery,” he said. “When you get a good signal and find pottery, you know you’re on to something good. My heart started fluttering, it’s unbelievable.”

Since the discovery on June 18, experts from Worcestershire County Council Historic Environment and Archaeology Service assessed the site and uncovered evidence of a Roman settlement. Tom Vaughan, project manager at the Worcester agency, indicated that the hoard was found on the side of the hill in an area that was densely populated with Roman farmsteads. However, the exact location is being kept secret.

Richard Henry, the Liaison Officer for the Portable Antiquities Scheme said, “This discovery of this coin hoard is really exciting news for Worcestershire and of major significance not only for the county but also the country.”

The 3,784 coins span 38 years and are a “fascinating little piece of history” dating from a turbulent time during which the Roman Empire saw revolts, rebellions, plague and invasions.

“This project is a fantastic example of the ways different professional groups and the finders can work together to help preserve our nation’s heritage,” said Henry.

It is believed that the coins were buried around A.D. 350, when there was a revolt involving the Dobunni and Cornovil tribes that were based in the Welsh Marches (the term used to describe the Wales-England border). However, following additional research that Worcestershire County Council Historic Environment and Archaeology Service undertook with the British Museum, it is believed the most recent coins in the hoard were minted around 80 years before they were buried.

The coins represent 16 different Roman emperors, according to news reports about the find.

The coins are currently with the British Museum for conservation and research. When this is completed, the information will enable the coroner (the local official responsible), Geraint Williams, to decide whether the hoard should be declared as treasure.

If this is the case, a market valuation will be set by the British Museum, and Worcestershire County Museum will have four months to raise the funding if they decide to acquire the find for long-term exhibition in the county. The finders and landowner will share in the proceeds from the sale.

A selection of coins from the hoard is on display at the Worcester City Art Gallery through Nov. 26. ¦