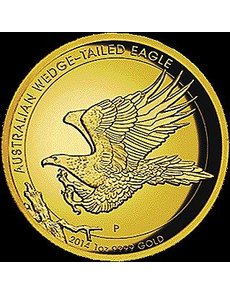 The reverse of two new high relief Australian Proof 2014 coins, including the gold $100 coin here, was designed by John Mercanti. 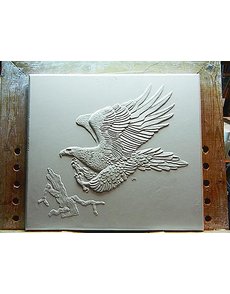 Mercanti’s rectangular sculpture of the wedge-tailed eagle is the basis for the design of the new coins. 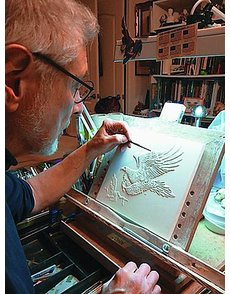 Retired chief engraver of the United States Mint John Mercanti works on a sculpture that is used for two new collector coins from Australia.

John Mercanti may have retired as the 12th chief engraver of the U.S. Mint, but he hasn’t stopped working as a coin designer.

The Perth Mint announced Jan. 7 that, in a project coordinated with distributor GovMint.com, Mercanti had designed two new Proof 2014 collector coins for Australia.

The 1-ounce .999 fine silver dollar and 1-ounce .9999 fine gold $100 coin, both struck in high relief, celebrate the wedge-tailed eagle, Australia’s largest bird of prey and one of the biggest eagles in the world, according to the Perth Mint. Defining characteristics include its huge wingspan (more than 7 feet for some birds), fully feathered legs (in contrast to its North American cousin, the bald eagle) and its wedge-shaped tail.

For the U.S. Mint, Mercanti designed the reverse of the American Eagle silver bullion coin, which shows a bald eagle, and he is responsible for more designs than any other employee in the history of the U.S. Mint, according to the Perth Mint.

Mercanti began his career with the U.S. Mint in 1974, and held the title of chief engraver from 2006 until his retirement in 2010, although the post was no longer a presidential appointment.

The reverse of the Wedge-Tailed Eagle coins shows an eagle preparing to land on the branch of a dead tree.

“I decided to show the eagle in flight, approaching the stump, wings spread so that the viewer could see the majesty of the wings,” Mercanti said, through a press release from the Perth Mint.

According to the Perth Mint, the design on a rectangular sculpture was adapted for the coin. Mercanti’s initials, which appear on the sculpture, were not transferred to the coin, and the coin design truncates some of the branch.

The silver coin weighs 31.135 grams and measures 32.6 millimeters in diameter.

The gold coin weighs 31.107 grams and measures 27.3 millimeters in diameter.

GovMint.com is the exclusive distributor of the coin to the United States, and its prices will likely differ from the Perth Mint’s pricing.