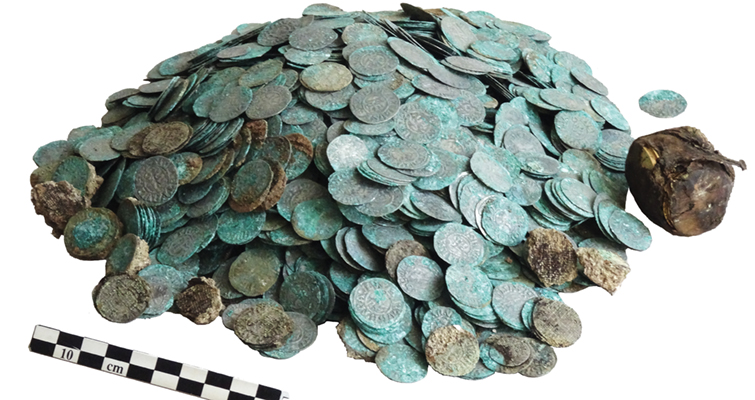 A hoard of 2,200 silver oboles and deniers, along with a small leather-wrapped cluster of gold coins and other items, was found at a French abbey in September.

A hoard of medieval coins and other treasure has been discovered at an abbey in France, some 850 years after being buried.

The find includes 2,200 silver deniers and oboles, a medieval coin then worth a half a denier.

The treasure was unearthed during a dig in September at the Abbey of Cluny, in the French department of Saône-et-Loire.

The former Benedictine monastery was dedicated to St. Peter.

A total of 21 Islamic gold dinars, a signet ring, and other objects made of gold were also part of the hoard.

Never before has such a large cache of silver deniers been discovered. Nor have gold coins from Arab lands, silver deniers, and a signet ring ever been found together within a single, enclosed complex, according to information provided by the officials involved in the discovery and recovery of the hoard.

The find was disclosed in early November.

Anne Baud, an academic at the Université Lumière Lyon 2, and Anne Flammin, an engineer with the French National Center for Scientific Research, both represent the Laboratoire Archéologie et Archéométrie at Claude Bernard Lyon 1 University. The pair led the archaeological investigation, in collaboration with a team of nine students from the Université Lumière Lyon 2 and researchers from the Maison de l’Orient et de la Méditerranée Jean Pouilloux.

The excavation campaign, authorized by the Bourgogne–Franche-Comté Regional Department of Cultural Affairs, began in mid-September and ended in late October.

It is part of a vast research program focused on the Abbey of Cluny.

Students in the Master of Archaeology and Archaeological Science program at the Université Lumière Lyon 2 have been participating in archaeological digs at the Abbey of Cluny since 2015.

This experience in the field complements their academic training and gives them an insight into professional archaeology.

Most of the coins in the hoard were minted there at the Abbey of Cluny or nearby, and probably date to the first half of the 12th century. The silver coins were concealed in a cloth bag, traces of which remain on some of the coins.

“This is an exceptional find for a monastic setting and especially that of Cluny, which was one of the largest abbeys of Western Europe during the Middle Ages,” according to the statement from the archaeologists.

At that time, Western currency was mostly dominated by the silver denier, and gold coins were rarely used.

A tanned hide bundle, found among the silver coins, fastened with a knot, enclosed the 21 Islamic gold dinars, which were struck between 1121 and 1131 in Spain and Morocco, under the reign of Ali ibn Yusuf (1106 to 1143).

Yusuf was a member of the Berber Almoravid dynasty.

Also included among the Islamic coins was a gold signet ring with a red intaglio depicting the bust of a god and an inscription possibly dating the ring back to the first half of the 12th century.

A signet ring was a very expensive piece of jewelry that few could own during the Middle Ages.

Other artifacts in the small bundle are a folded sheet of gold foil weighing 24 grams and stored in a case with a small circular object made of gold.

The fact that Arab currency, silver deniers, and a signet ring were enclosed together makes this discovery all the more interesting, opening new avenues of research into the history of the Abbey of Cluny, according to information provided by the archaeologists.

Vincent Borrel, a doctorate student at the Archaeology and Philology of East and West research unit, is currently studying the treasure in more detail to identify and date the various pieces with greater precision.

This discovery will breathe new life into research delving into the past of the abbey, a historic site open to the public and managed by the Centre des Monuments Nationaux.

It also raises new questions worth answering, according to the experts.

Who owned the treasure?

Was it a monk, a church dignitary, or a rich layman?

What can the coins and other items teach us?

Where were the silver deniers of Cluny struck? Where did they circulate?

How did Islamic dinars minted in Spain and Morocco end up at Cluny?

Why was the treasure buried?

What lay above the treasure when it was hidden? Was it a building, now in ruins, that we know little about?