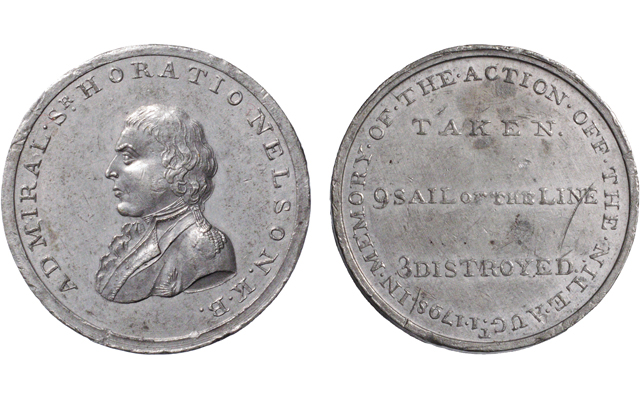 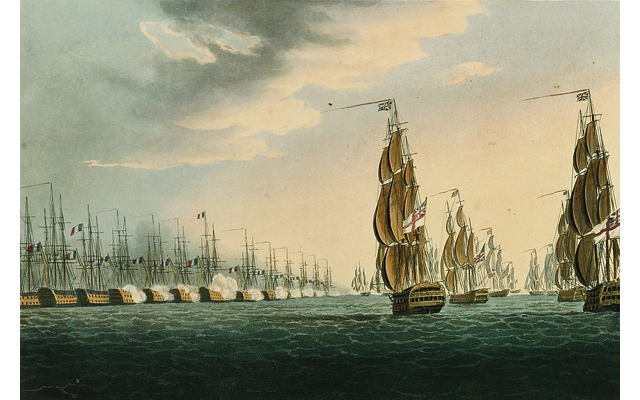 The British fleet bears down on French ships in the 1798 Battle of the Nile, as portrayed in this 1816 Thomas Whitcombe painting. 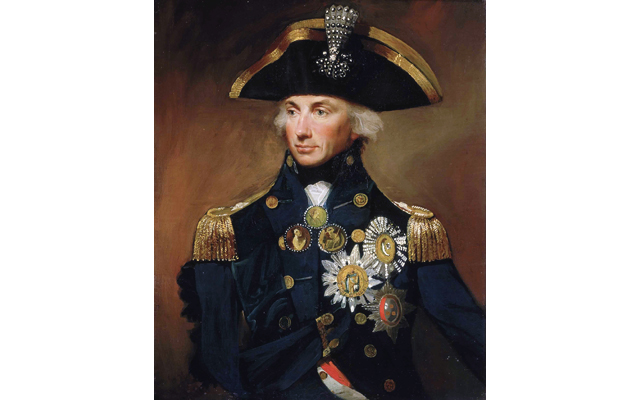 A painting of Vice Admiral Lord Horatio Nelson dates to 1799.

When Rear Adm. Horatio Nelson defeated Napoleon Bonaparte at the Battle of the Nile in early August of 1798, it reversed the balance of naval power in favor of the British, ending French hopes of taking British colonial Africa. It was a stunning defeat for the nearly invincible Bonaparte, and his defeat helped persuade other powers to join the fight against the French.

According to dealer Allan Davisson, “The battle really sent the message that, maybe Napoleon can be beaten after all.”

Davisson’s numismatic firm, Davisson’s Ltd., is offering a circa 1798 or later white metal medal marking the Battle of Nile victory, in its mail bid and live Internet auction that closes Jan. 21.

The medal is classified as a Conder token (a name taken from an early cataloger of similar pieces) more modernly cataloged by R. Dalton and S.H. Hamer in The Provincial Token-Coinage of the 18th Century Illustrated.

A subset of Conder tokens circulated as money substitutes when the Royal Mint wasn’t striking low-denomination coinage, while others were made just for collectors or on commission by well-heeled nobles.

The piece in Davisson’s auction was issued in Southampton, in Hampshire, and is cataloged as token 8a for the region. Nelson appears on the obverse, while legends commemorating the battle are on the reverse of the 34-millimeter diameter piece.

According to Davisson, this is the first white metal version he has seen in his 40+ years in business. Three examples are known in copper, but apparently only this one is known in white metal. In addition to the unique metal, what’s missing from the edge makes this example notable.

The copper pieces all bear an edge inscription reading GOOD FOR ONE PENNY, absent from this piece. Edge devices on Conder tokens were generally formed in an operation separate from the forming of the obverse and reverse designs.

The Nelson token looks like a lot of medals of the time.

“It’s a fairly high relief piece so it’s not something they were going to be able to reproduce in some quantity,” he said.

When prompted, Davisson said: “If I were speculating, I’d speculate that it was a trial. We don’t necessarily know that though.”

This example has been off the market for “at least” 50 years, and maybe more.

“It’s missing from some of the most important collections [of Conder tokens],” Davisson said.

Davisson estimates it will realize at least $1,500, though he acknowledges that it is hard to put an estimate on this apparently unique example. Davisson used as a guide the sale of a copper example from the Wayne Anderson Collection that Davisson sold in 2000 for $1,100.

However, there has been a resurgence in prices for Conder tokens, he said.

“I’ve been flabbergasted at what’s happening with prices ... especially so for quality pieces, even if they are common,” Davisson said.

The example in Davisson’s sale is designated as “Extremely Fine+” with some slight marks, and slight rubbing.

His sales have no buyer’s fee.