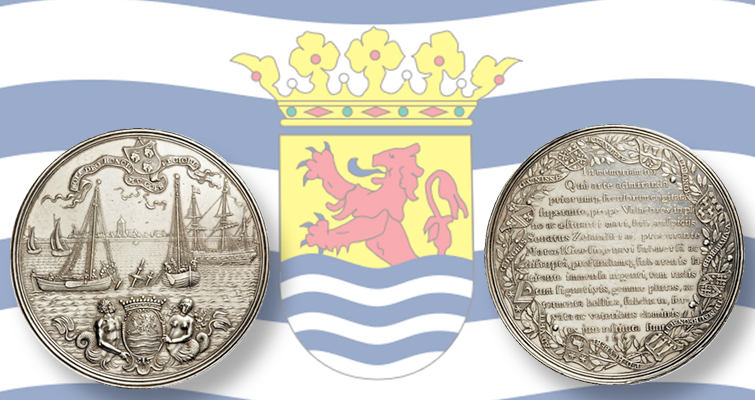 A 1660 silver medal celebrates the recovery of precious metal, coins, gems and cannons from a shipwreck of a Dutch merchant vessel at the height of the Dutch supremacy on the seas.

For a time the Dutch ruled the seas, their merchant vessels sailing far and wide in the name of the kingdom.

A silver medal in Nomos Ag’s Oct. 7 auction in Zurich recalls the sailing dominance of the Dutch and a shipwreck from that time period.

The medal is part of a broad collection of European medals from 1513 to 1788 offered in the auction.

The medal measures 70 millimeters (about 2.75 inches) and weighs 117.19 grams, nearly 4 troy ounces. The work by an unknown engraver celebrates the recovery of a sunken treasure ship near Westkapelle by a team led by Marcellus van der Goes. Westkapelle is a small city in the municipality of Veere on the island Walcheren, in the province of Zeeland.

The obverse is dated 1660 and bears an inscription translating to “Marcel van der Goes gives honor and glory solely to God.”

Two salvage boats appear on either side of a wrecked ship; on board the boats, crewmen use a special apparatus to raise up items within the wreck. Beyond the foreground ship scene is a view of the city of Westkapelle. According to Nomos, the merchant ship had sunk some years earlier “under the command of the very appropriately named Captain Waterdrinker.”

The reverse features an inscription of 14 lines, translating to “A memorial of how, by an admirable art, surpassing the inventions of past centuries, under the auspices of the Deputy Councillors of Zeeland and under the direction of Marcellus van der Goes, a great quantity of coined and bullion silver, many precious stones and many cannon were raised up near Walcheren, from a vessel lost, destroyed and sunk in the sands, and then returned to their proper owners.”

The inscription appears within an olive wreath entwined with the names and arms of the eight directors of the project.

The medal is “nicely toned and very rare,” with “some minor marks,” but is otherwise Extremely Fine, according to the firm.

To learn about the sale, visit the firm’s website.