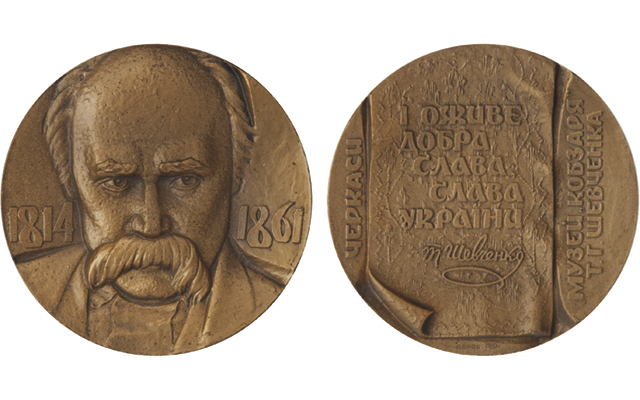 A look at Ukrainian medallic art reveals the culturally towering figure of Taras Hyrhorovych Shevchenko. Medals include a 60-millimeter piece struck at the then Leningrad Mint for the Cherkasy Museum of Taras Shevchenko in 1961.

A casual look at Ukrainian medallic art reveals various appearances of the towering figure of Taras Hryhorovych Shevchenko, including a 60-millimeter piece struck at what was then the Leningrad Mint for the Cherkasy Museum of Taras Shevchenko in 1961.

Designed by an artist signing himself as Popov, the obverse bears a facing bust with walrus moustache and peasant blouse flanked by vital dates 1814 1861.

The reverse shows a textured Ukrainian woven cloth scroll. Inscriptions include the museum name, praise of Shevchenko’s works as the glory of Ukraine, his facsimile signature and the Leningrad Mint mark. This tan-gold medal displays a plain edge.

Revered as the greatest intellect in Ukrainian history, Shevchenko was born to a family of serfs belonging to landlord V. Engelhardt in the village of Moryntsi.

Despite poverty, opposition and an abusive master and stepmother, he learned to read and taught himself to draw and paint. He then underwent a difficult four-year apprenticeship under painter V. Shyryayev in Saint Petersburg.

Shevchenko’s extraordinary talents impressed leading Russian artists, who used 2,500 rubles from an art-work lottery to purchase his freedom on April 22, 1838. He was accepted to the Association for the Encouragement of Artists and became an external student in the Academy of Arts in 1839 and 1840, earning silver award medals for his oil paintings.

His poetry was recognized while he was still a serf. He developed a deep interest in Ukrainian history, painting views of historical sites and joining the Society of Saints Cyril and Methodius, a nationalist group.

Imperial censors of Emperor Nicholas I outlawed the society, and the emperor ordered Shevchenko into internal exile in military custody at Orenburg, personally stipulating that he was to be held “under the strictest surveillance, with a ban on writing and painting.”

Caught writing and sent into even more remote exile, where he took an active part in official military explorations in Siberia.

He perfected his skill in etching and engraving, returning from exile to fame, only to die of illnesses contracted in the wilderness where he had served his sentence. Ultimately, he was buried on Chernecha Hill overlooking the Dnipro River, but today his monuments are found across Russia, Ukraine, Poland, the United States and Canada.

His art and writings outlived the empire. The Communists then recast Shevchenko as a safe Ukrainian hero who predated the Revolution and modern movements for an independent Ukraine, rewriting his biography with lavish strokes in the process.