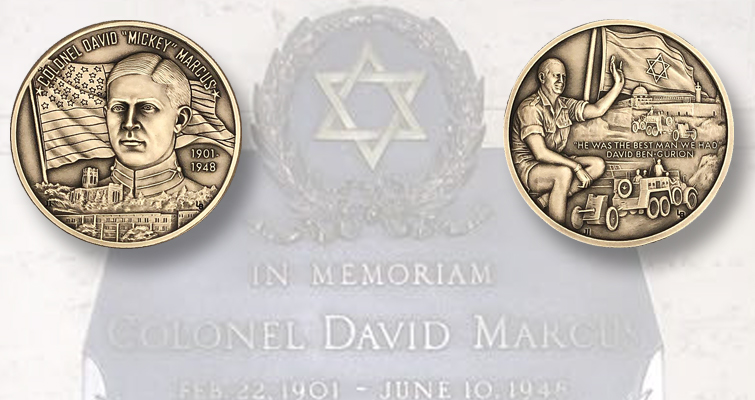 American David Daniel “Mickey” Marcus appears on a new medal from the American Israel Numismatic Association. Marcus was a hero of Israel’s War of Independence.

They were designed by Joel Iskowitz, who has created over 50 designs for coins and medals issued by the U.S. Mint.

A total of 120 2-inch bronze high relief medals were minted, and fewer than 30 are still available.

The regular cost is $50, but customers indicating that they read about the medal in Coin World can take a 20 percent discount.

The obverse of the medal features a portrait of David Daniel “Mickey” Marcus as a 1924 graduate of West Point.

During World War II, Marcus organized and commanded a Ranger Combat Training School, and he later parachuted into Normandy on D-Day with the first wave of the 101st Airborne Division.

In 1946, he was named chief of the Army’s War Crimes Division in Washington, planning legal and security procedures for the Nuremberg Trials and the Tokyo War Crimes Tribunal.

On May 28, 1948, Marcus was appointed aluf (“general”) by David Ben-Gurion, and was given command of the Jerusalem front. Marcus built the “Burma Road to Jerusalem” — a makeshift winding road through difficult hill terrain (pictured on the medal’s reverse); it was opened to vehicles on June 10, breaking the siege of Jerusalem.

Shortly after, Marcus was accidentally shot to death by a sentry, when he failed to give the password. Marcus’ story was told in the 1966 motion picture Cast a Giant Shadow starring Kirk Douglas. 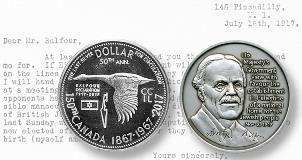