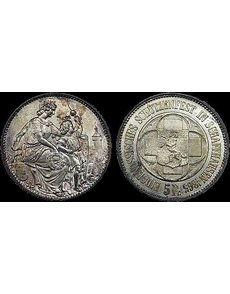 A silver 1865 5-franc medal from a shooting festival in Schaffhausen, is a common, affordable vehicle for telling the legend of William Tell and is offered in a Dec. 2 auction. 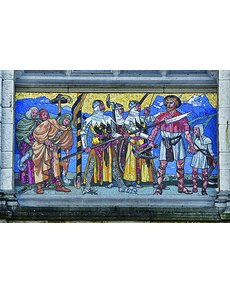 The legend of William Tell and his son is told in various media in Swiss art, including this colorful mosaic at the Landesmuseum in Zurich.

The apple that Swiss folk hero William Tell allegedly shot might be the second-most famous apple in the world, only behind the tasty morsel that tempted Adam in the Garden of Eden.

According to legend, with one shot of a crossbow in the 14th century, Tell became the catalyst of a centuries-long struggle to create Switzerland. Marksmanship has been ingrained in the culture ever since, and today the nation still conducts shooting festivals in a tradition dating to the 1500s.

Annual shooting festivals (schützenfests) are held in various cities throughout the nation, with a national festival held about once every five years. The custom of issuing medals (or “shooting talers” as the medals are commonly called), with a face value that could be redeemed only during the festivals, began in the 1840s and continues today.

A collection of historic and modern shooting talers is offered in Numismatic Auctions LLC’s Dec. 2 auction, and includes one medal depicting Tell’s son and that famous apple.

The 1865 silver medal celebrates the federal shooting festival in the city of Schaffhausen in the canton of the same name.

An allegorical figure appears with Tell’s son on one side of the medal, and a shield bearing a ram, the face value and year appear on the other side (catalogs do not agree on which side is the obverse and which is the reverse).

In the legend, Tell was forced to shoot the apple on his son’s head, or else face punishment for failing to bow in front of a symbol of the newly appointed overlord.

Taking two arrows from his quiver, Tell successfully sliced the apple with his first shot. The legend has it that, had Tell killed his son accidentally, he would have used the other arrow against the overlord. When the overlord learned that, he bound Tell and sent him to live in a dungeon, but Tell jumped ship and traveled to the ruler’s castle to assassinate the overlord.

Tell’s rebel status has inspired generations of Swiss people, and he is memorialized in the nation’s pantheon, not quite the Swiss version of George Washington.

The 25-gram .900 fine silver medal measure 37 millimeters in diameter (about the size of an American Morgan or Peace silver dollar).

The medal is among the most common of Swiss shooting talers, with a mintage of 10,000 pieces. It is also relatively affordable — the example in the auction is Uncirculated with light contact marks on the obverse and “golden-russet” toning and has an estimate of $200 to $300, a price likely to hit the mark with many buyers. ¦

The legend of William Tell lives on, including on this silver shooting festival medal