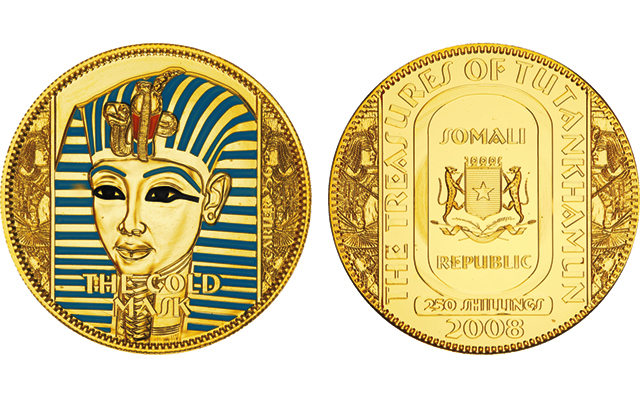 The golden funeral mask of ancient Egypt’s King Tut is made from 24 pounds of gold and gems. You can find numismatic depictions of it on world exonumia and coins, like this Proof gilded enameled bronze 250-shilling commemorative coin from Somalia. 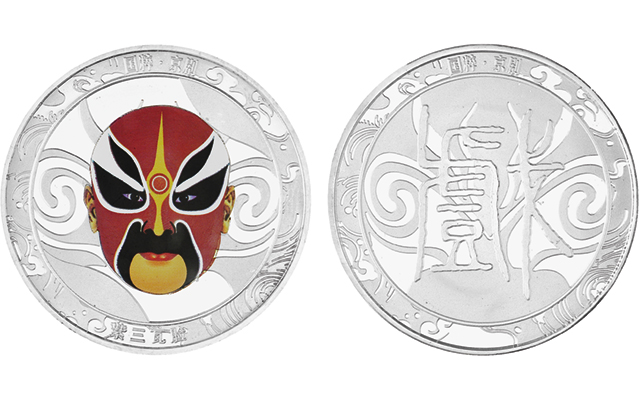 In 2008, China began issuing a series of gold and silver coins depicting masks of the Peking Opera. For a more affordable alternative to the expensive series, a collector might explore the undated enameled silver-plated medals from China with designs very similar to the coins. A medal is shown. 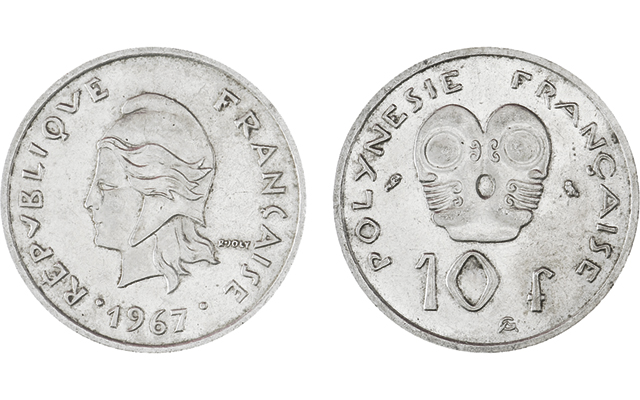 The tiki design originated in French Polynesia. The nation’s 10-franc coin has shown two tiki god masks since 1967, facing left and right, joined at the backs of their heads. 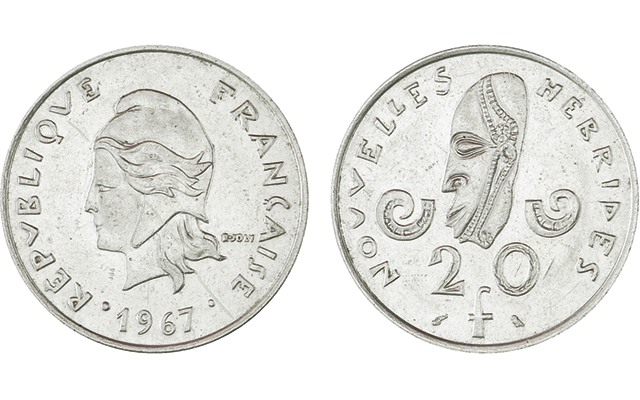 The mask on this 1967 20-franc coin of Vanuatu (once called New Hebrides) is used in ceremonies that include ancestor worship. 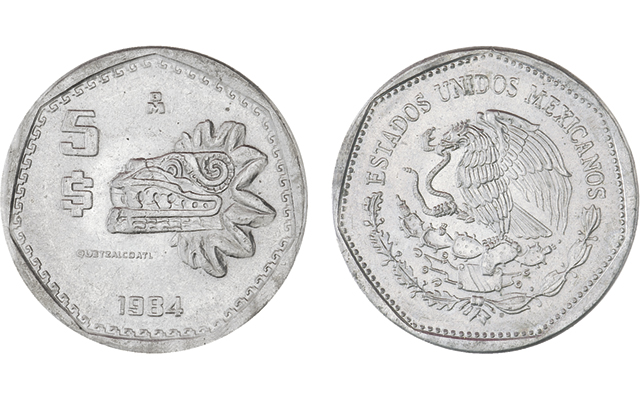 The elongated mask on this Mexican 5-peso coin is worn by a feathered serpent god called Quetzalcoatl who uses it to sweep the land with wind before other gods send rain. 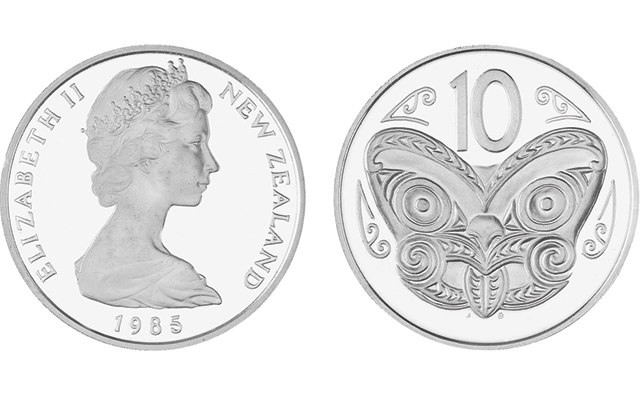 A Maori mask called a koruru, an example of which is shown on the New Zealand 10-cent coin since 1967, is actually attached to the gable of a community meeting house and uniquely represents the ancestor for which each large building is individually named. 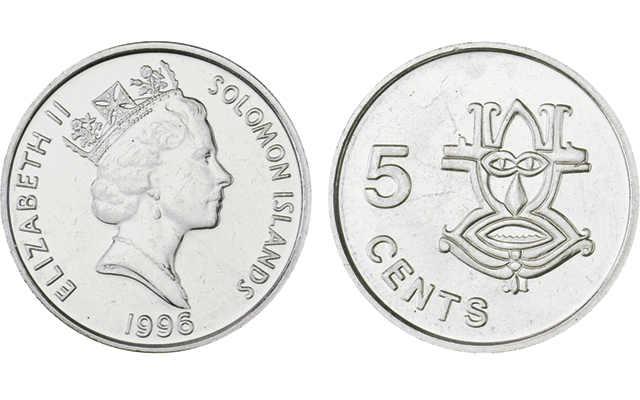 The mask on the Solomon Islands 5-cent coin was probably for ceremonial use during funerals, until the 1800s, only in the northern part of the islands. 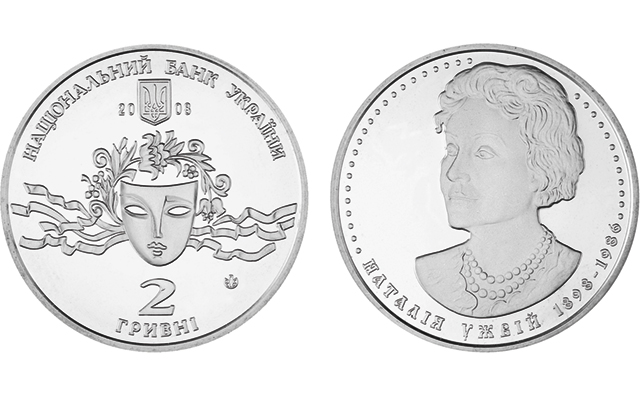 The 2008 Ukrainian 2-hryvnia coin is dedicated to the famous homegrown actress, Nataliia Uzhvii (1898 to 1986). The mask on the coin symbolizes her more than 200 dramatic roles.

For most of us, the first encounter with a mask involves a costume and trick-or-treating.

But masks serve as icons of ceremonies, rituals and performances dealing with many aspects of human life and culture. As a result, masks appear on coins and medals minted all around the world.

The death mask of Tutankhamen is the world’s most valuable mask and a most famous example of ancient Egyptian craftsmanship. It covered the mummified head of the young pharaoh for centuries before being unearthed in 1922. Made with almost 24 pounds of gold, it is inlaid with glass and enamels, and gemstones like lapis and quartz. You can find depictions of King Tut’s well-known mask on world coins, paper money, bullion pieces, art medals, Mardi Gras doubloons, and casino gaming tokens.

Among the newest items showing the Tut mask is a Proof 2008 250-shilling coin from Somalia. In ancient times Somalia was a major trading partner with Egypt. To celebrate the worldwide traveling King Tut exhibit that started in 2005, Somalia in 2007 issued a set of five gold-plated enameled Ancient Egypt commemorative coins that included one showing the Tut mask. The same five design were used again on 2008 and 2009 coinage. Today, the coin with Tut’s mask sells for two to four times more than the others in the series.

Janus masks are symbols of modern day theater. Named for a two-faced god, they date back to ancient Greece. The weeping tragedy mask symbolizes the muse of tragedy and singing, and the laughing comedy mask, the muse of comedy and poetry.

Sometimes, these masks have a neutral expression that represents drama. A dramatic mask is part of the design of the 2008 Ukrainian 2-hryvnia coin that commemorates the life of actress Nataliia Uzhvii (1898 to 1986). During her stage career, she reprised more than 200 roles, including Shakespearean plays.

The Jingju or Peking Opera is a form of traditional Chinese theater that combines music, singing, mime, dance, and acrobatics. Masks used for many of the main characters are sometimes painted on the performers’ faces instead of being worn.

Beginning in 2008, China issued a series of Jingju mask gold and silver coins. With their bright colors and eerie expressions, the coins sell today for hundreds of dollars each. Alternatively, several undated enameled silver-plated Chinese medals have designs very similar to the coins. A full set of 12 medals costs about $50 in U.S. funds.

According to the people of French Polynesia and Tahiti, Tiki is the name of the first man who ever lived, but depending on the context of the discussion, Tiki can also be a spirit or god. To carve a wooden mask with the specific features of a god is to infuse that mask with the god’s spirit. Tiki masks are carved to honor a deity or ancestor, or to promote fertility or protection.

Tiki carvings have become so popular, there is an entire interior-design type named for them. The 10-franc coin of French Polynesia contributed to tiki fever with its dual tiki masks. It has been continuously minted since 1967.

Melanesia comprises island nations north of Australia including Vanuatu (formerly New Hebrides). The carved wooden masks were once used in ceremonies that promoted ancestor worship. Some of these masks with their exaggerated human features show up on the coins of New Hebrides, as on the 20-franc piece from 1967.

Quetzalcoatl, the feathered serpent, was worshipped as a god in Mexico by both the Mayan and Aztec people long before the Spaniards arrived. In some carvings and on the Mexican 5-peso coins (1980 to 1985), Quetzalcoatl wears a beaked mask that he puts on when acting as the god of wind. Quetzalcoatl uses this long protruding mask to sweep the roads clean before other gods arrive with the rain.

In the Solomon Islands, only the northern part, like Santa Ysabel, once used masks made of bark cloth stretched over a cane frame.  Their exact usage has been lost to time, but some historians believe the masks were part of funerals up until the 1800s.

Sometimes a mask is not made for a face. The Maori koruru mask on the New Zealand 10-cent coin that has been continuously made since 1967 is actually a type of mask made to adorn the outside gable of a large meeting house called a wharenui.

Both the mask itself and the patterns that are carved into it are unique to each house and represent ancestors of the Maori that use the house. The house may also be named for that ancestor.