'Martyr for his Peoples' 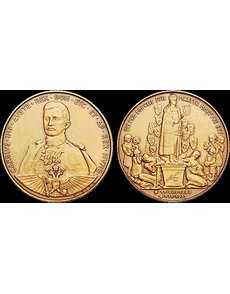 Few world leaders emerged from World War I with reputations or careers intact.

Russian Czar Nicholas II and his family were murdered in 1918. Germany’s Kaiser Wilhelm II was forced to abdicate on Nov. 9, 1918, and died in forgotten exile in 1941. Incapacitated by a massive stroke, American President Woodrow Wilson died an embittered invalid in 1924 after watching his dreams of world peace discarded by Congress and the electorate. Numismatic appearances of erstwhile leaders after 1918 are few and far between.

One ruler whose post-war history took a different direction was the last ruling Habsburg, Emperor Karl I of Austria, who ruled Hungary as King Karl IV, sometimes Latinized as Carolvs. Born in 1887, Karl became heir after the suicide of Austria’s Crown Prince Rudolf in 1889 and the assassination of Archduke Franz Ferdinand in 1914, ascending the thrones at Emperor Franz Josef’s death in December 1916. Though inexperienced, Karl had two far-reaching goals: ending the war and restructuring the Habsburg realms into a federative state preserving the unity of the Danube basin.

He appears on many medals that hail his marriage to Zita of Bourbon-Parma, the birth of his son, events of the war, accession in Austria and coronation in Hungary, before disintegration began in late 1918. Karl never abdicated in Austria or Hungary, but “renounced participation” in state affairs in 1918 until stability could return.

Hungary underwent enemy invasion, a brief bourgeois republic and a soviet state before Adm. Miklos Horthy’s White Army took power. Austria proclaimed itself “German Austria” as a unit of the new German Republic, a move disallowed by the Allies. Karl was driven into exile, but made two forceful attempts to recover the Hungarian throne before being shipped to the island of Madeira in 1921 to die in poverty and neglect on April 1, 1922.

This was not his end in numismatics. A 60-millimeter medal commemorated his death in 1922. Designed by artist H. Zita, it bears Karl’s bust as an Austrian field marshal. The reverse bears his standing form in Hungarian coronation regalia with Latin legend, “Who died a Martyr for his Peoples.” Flanking him are shields of Hungary, Galicia, Croatia, Dalmatia, Transylvania, Bosnia, “genealogical” Habsburg, Moravia, Bukovina, Silesia, Fiume and Slavonia. Birth and death dates complete the design.

The emperor’s “heroic Christian virtue” was ultimately recognized, and Pope John Paul II beatified him as “Blessed Charles of Austria” on Oct. 3, 2004, a status unique among 20th century rulers and just short of sainthood.

David T. Alexander, is a Senior Numismatist and researcher for Heritage Auctions, davida@ha.com. He is
author of American Art Medals, 1909-1995.