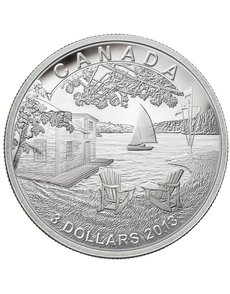 One of the entertainment world’s most respected personalities, comedian Martin Short, has partnered with the Royal Canadian Mint to deliver his own touching and intimate perspective of Canada on a new $3 fine silver collector coin.

The “Martin Short Presents Canada” coin features a serene and inviting interpretation of Short’s summer home in Muskoka, Ontario, a place he affectionately calls “the most staggeringly beautiful part of Canada.”  The coin’s reverse design features a sailboat gliding across a lake towards a boathouse, while pine and maple trees provide a canopy over two Adirondack chairs.  Nearby, Canada’s National Flag waves from a marine-inspired flag pole standing on one of the region’s signature whaleback rocks.

Short consulted with Canadian artist Tony Bianco to create the design, sharing personal stories and family photographs to express what Canada means to him. “As much as I adore the excitement of cities, it’s rural Canada that has always had my heart” said Short.  “When I’m there, I feel like I’m in heaven. More than anything, that’s what Canada means to me.”

Canada’s own Martin Short is best known for his quick wit, and superb comedic timing. Success with CBC’s Second City, the SCTV and Saturday Night Live led to film and Broadway, and a continually remarkable career. His awards list is equally diverse and includes a Gemini, an Emmy, a Tony, the Order of Canada, plus a Queen Elizabeth II Golden Jubilee Medal.  Short currently lives in California, but his all-time favourite place remains Lake Rosseau in Ontario’s famed Muskoka region.

The Martin Short Presents Canada coin is crafted in 99.99% fine silver, and has a mintage of 15,000. The coin can be ordered directly from the Mint at 1-800-267-1871 in Canada, 1-800-268-6468 in the US, or online at www.mint.ca. It is also available at the Royal Canadian Mint's boutiques in Ottawa, Winnipeg and Vancouver, as well as through its global network of dealers and distributors.