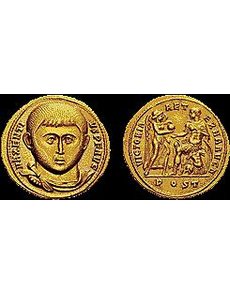 The auction was conducted Oct. 6 by Numismatica Ars Classica and offered a run of coins bearing portraits of every significant male figure in Roman history, including the Republican period, on coinage.

Leading the way was a circa 310 to 312 gold aureus of Emperor Maxentius from the ancient harbor city of Ostia. Described as “one of the most beautiful Roman coins in existence,” according to the catalog, the gold aureus in the auction features “a spectacular portrait struck on a full flan.” In Good Extremely Fine condition, the coin realized 734,375 Swiss francs ($796,296 U.S.).

The coin, one of only two examples known, was discovered in the Arras Hoard. The other example is part of the British Museum’s fabled collection.

Every one of the 133 lots in the collection was sold.

Numismatica Ars Classica’s buyer’s fees begin at 17.5 percent; an additional 1.5 percent is added for telephone and Internet bidders. Prices listed here include only the beginning fee.

Roman Empire, Clodius Albinus Augustus, circa 195 to 197 gold aureus, Lugdunum, “only the second specimen known of this type and only the fourth aureus of [the ruler] known,” “insignificant die break on reverse, otherwise virtually as struck and almost FDC,” 705,000 Swiss francs ($765,049 U.S.).

Roman Empire, Theodosius I, circa 389 silver medallion of 3 light miliarenses, “only the third and by far the finest specimen known,” “an almost invisible trace of double striking on obverse, otherwise” EF, 135,125 Swiss francs ($146,634 U.S.).