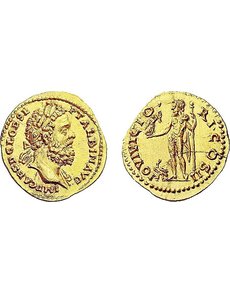 A gold aureus of Clodius Albinus as augustus, struck at the Lugdunum Mint, is one of two specimens known. It leads Numismatica Ars Classica’s Oct. 6 auction of the S.C. Markoff Collection of Roman Coins.

The sale, the firm’s 62nd, offers the S.C. Markoff Collection of Roman coins across the centuries, totaling 133 lots filling an 81-page catalog.

Steve Markoff created the collection around the idea that it would contain a coin bearing a portrait of every significant male figure in Roman history. Markoff would not be bound to coins of a specific denomination or metal, sometimes representing the figure with a medallion. In those instances where rulers never had their portraiture on a coin, Markoff collected a representative issue of the ruler.

The circa A.D. 195 to 197 gold aureus of Clodius Albinus, struck at the Lugdunum Mint, is noted not only for its “superb portrait” of the little known ruler, but for its rarity: the example offered at auction is “only the second specimen known of this type and only the fourth aureus of [the ruler] to be known.”

All aurei of Clodius Albinus as augustus are “so rare as to be virtually unobtainable,” according to the catalog. The “rustic” engraved style of these coins are distinct from those issued featuring Clodius Albinus as caesar, which are themselves rare.

Though it has an “insignificant” die break on the reverse, otherwise the coin is “virtually as struck” and almost Fleur-de-Coin. It has an estimate of 450,000 Swiss francs (about $502,914 in U.S. funds).

Roman Empire, Titus Caesar, A.D. 70 gold aureus, Judaea, “unique,” “one of the very few Roman issues to be struck in Judaea and possibly the most important coin of the whole series,” Lot 2029, “slightly off-centre, otherwise” About EF.

Roman Empire, Theodosius I, circa 389 silver medallion of three light miliarenses, “only the third and by far the finest specimen known,” Lot 2114, “an almost invisible trace of double striking on obverse, otherwise” EF.