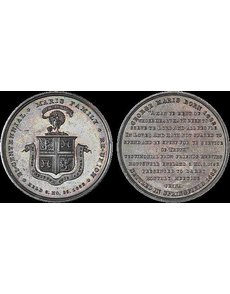 The Maris family referenced on this reunion medal originated in England. The family was among the earliest adherents of the Religious Society of Friends, commonly called the Quakers.

One of the U.S. Mint-struck more remarkable privately commissioned medals described by R.W. Julian in his Medals of the United States Mint — the First Century hailed the Maris Family Bi-Centennial Reunion of 1883. This 38-millimeter medal is listed in the Julian book as CM-27 and is known in gold, aluminum and copper-bronzed versions. The last named alloy was pure copper to which a secret-formula bronzing powder was applied.

The obverse presents the family arms — a shield quartered with eagles and heraldic andirons under a peacock crest with Latin motto ESSE QUAM VIDERE, “To Be rather than to Seem.” On a scroll below is SI DEUS NOBISCUM QUIS CONTRA NOS, “If God is with Us, Who can be Against.” The legend gives the reunion dates as 8 MO. 25 1883. “August” was not used as it recalled a pagan Roman emperor.

The Maris family originated in England and its members were among the earliest adherents of the Religious Society of Friends, commonly called the Quakers.

Early Friends leader George Fox accidentally created the “Quakers” name when he told a hostile magistrates’ court in 1650 that his judges should “tremble and quake” at the Word of the Lord.

The Quakers faced opposition and active persecution for beliefs that included acknowledgement of Jesus as Lord, the priesthood of all believers, democracy in religion and society, plain speech and plain dress. They opposed ostentation and opposed slavery,
and they refused to serve in war.

They settled in the American Colonies in the 1600s, notably in Pennsylvania under the leadership of William Penn, and also in New Jersey and into Ohio.

The medal reverse honors founder George Maris, born 1632, who settled in Springfield, N.J., in 1683, A MAN YE BENT OF WHOSE HEART HATH BEEN TO SERVE YE LORD AND ALL PEOPLE IN LOVE; AND HATH NOT SPARED TO SPEND AND BE SPENT FOR YE SERVICE OF TRUTH.

This testimonial was sent by the Friends Meeting of Hattswell, England, to Darby Monthly Meeting in Darby, on “3. MO. 6. 1683.” “March” was also avoided as of pagan origin. The Maris family soon spread far and wide across the United States. Prominent numismatist Dr. George Maris, who pioneered the study of New Jersey Colonial and state coppers and early U.S. large cents, was of this influential family.

Building on a rare 19th century family history, genealogist Raymond L. Maris has recorded some 300,000 descendants of the medal’s George Maris, stretching over 17 generations. This is surely a well-documented American family whose history is anchored by its own U.S. Mint medal.