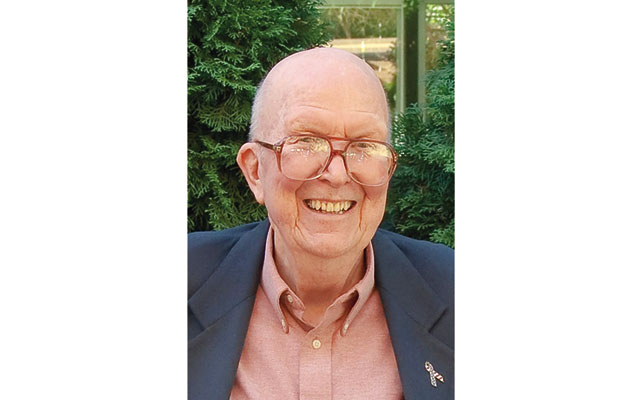 Harrington “Harry” Manville’s library of books dedicated to the coinage of the British Isles is being sold by Douglas Saville Numismatic Books.

Harrington Elmer Manville formed one of the most remarkable numismatic libraries dedicated to the coinages of England, Scotland, Ireland and the United Kingdom. Formed over half a century, it weighed over two tons when it was delivered from Washington, D.C., to Caversham, a suburb of Reading in the UK.

Manville worked for the U.S. diplomatic service, his assignments taking him to Asia and Europe as well as North America. His collecting interest was British coinage and despite only being able to visit London infrequently prior to the final quarter of the 20th century, he formed an important collection of milled coins. In the late 1970s he was based in Washington and in early 1980 he retired. His important collection of coins was sold at Spink in mid-1980 (the highlight was a 1658 Cromwell sixpence that realized £10,000 hammer).

From around the mid-1970s, he laid the foundations for realising a dream: writing the Encyclopaedia of British Numismatics.

From 1986 through to 2014, five volumes were published. Although he had been buying numismatic books for many years, he now started in earnest. He purchased locally from Frank and Laurese Katen in Silver Spring, Md., and from Douglas Saville, then manager of Spink’s Book Department in London.

Although Manville had access to the library of the National Numismatic Collection at the Smithsonian Institution in Washington, it was not strong in material relating to the British Isles. So, he had to form his own ultimate reference library.

The result was an Aladdin’s Cave guaranteed to put the numismatic bibliophile into frenzied excitement. It contained the unique, the very rare, merely rare, the scarce, the common and the mundane.

Some items are highly valued in monetary terms, but others fell within the budgets of even the most modest of individuals, but are not only highly interesting, but are also rarely offered. To date some 30 buyers, including institutions as well as private individuals, have purchased books from the library.

So, what are the highlights? Too numerous to list, but here are a couple.

A 1770 auction catalogue for Jasper Bull’s "genuine and curious gold, silver and copper, British and Saxon coins and medals" offered at the Exchange coffee-house on March 15, 1770. Annotated in ink with the buyers and other information, it is most likely unique and is a real curiosity.

Another is a limited edition – 200 copies only – of Notes Gleaned from Contemporary Literature regarding 18th century Middlesex Tokens by A. W. Waters and published in 1906. This copy was owned by S. H. Hamer, the co-author of The Provincial Token-Coinage of the 18th century, by Dalton & Hamer, and is annotated in the latter’s hand. Published in 1910, it is still the standard work.

We won’t see a library like this for many years to come – if ever!