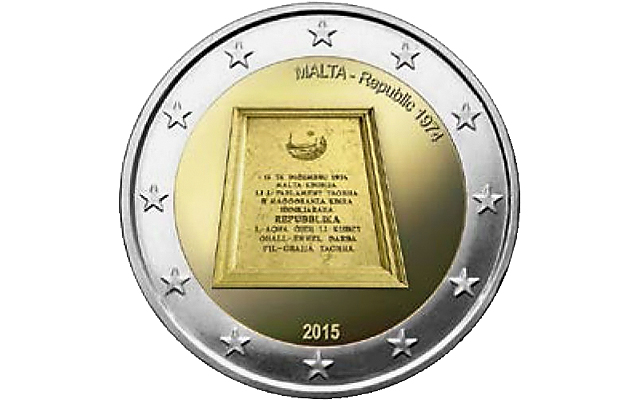 Later in 2015, the Central Bank of Malta will issue the final circulating commemorative €2 coin in a five-year series honoring milestones in the nation’s constitutional history. 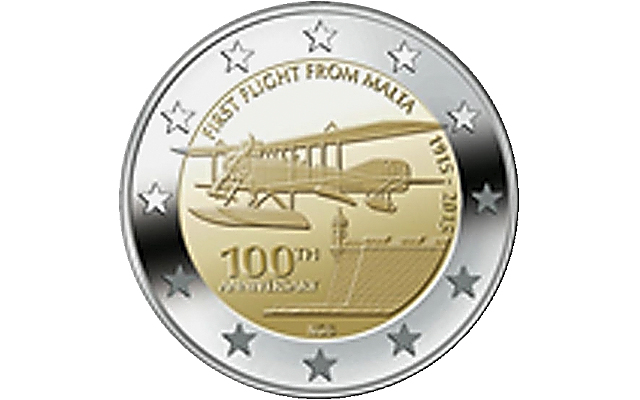 The design for Malta’s 2015 circulating commemorative €2 coin for the nation’s constitutional anniversary has been revealed.

The European Commission’s Official Journal of the European Union on April 30 published the obverse design for the coin, which will celebrate the Republic of Malta’s founding in 1974.

The coin is the final one in a series of five that commemorate Maltese constitutional milestones. Malta was declared a republic on Dec. 13, 1974, following constitutional changes agreed upon by a great majority in Malta’s Parliament.

The design reproduces a marble tablet affixed to the façade of the Presidential Palace in Valletta to mark Malta’s change from a monarchy to a republic.

Inscriptions on the coin indicate the issuer, the anniversary year and the year of the coin’s issue, 2015.

They will follow Malta’s first circulating commemorative €2 coin for 2015, which celebrates the first flight from Malta. That coin is being released May 25.

On Feb. 13, 1915, during World War I, Flight Commander Captain Cecil Francis Kilner, Royal Marines Light Infantry,(his name is mistranscribed from the handwritten ship's log as "Kilmer" in some official sources) took off from Malta’s Grand Harbour on a seaplane that was carried by HMS Ark Royal, the first ship in the world specifically built to carry seaplanes. The flight began at 4:50 p.m. and returned at 5:25 p.m., according to the HMS Ark Royal log.

The coin depicts Captain Kilner’s seaplane with Senglea Point, a prominent feature in the Grand Harbour, in the background.

Inscriptions noting the anniversary and the year of issue also appear on the design by Noel Galea Bason.

The mintage limit for these coins is unspecified, but the Central Bank has announced that 25-count rolls will be sold, as well as invidual coins in collector cards. A limited number (25,000 pieces) will feature the Mint mark of the Royal Dutch Mint, which is striking the coins.

Each eurozone member may issue up to two different circulating commemorative €2 coins annually, not counting any such coins issued through a joint program organized by the European Commission.

Later in 2015, all eurozone nations will issue a circulating commemorative €2 coin celebrating the 30th anniversary of the adoption of the European flag as the official emblem of the European Union.

This coin will have a common design issued in all the euro area countries. The issue date is still to be set.