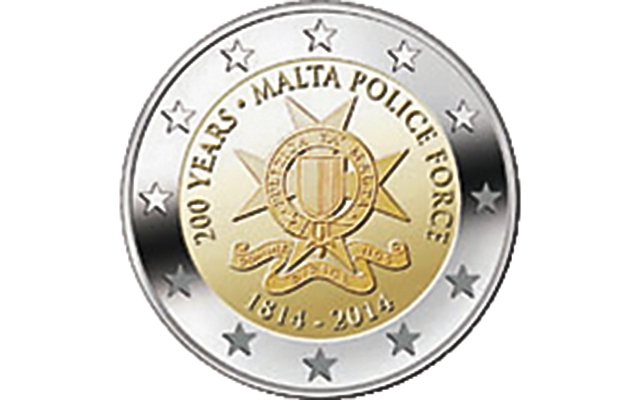 The Central Bank of Malta has issued a circulating commemorative €2 coin celebrating the 200th anniversary of the Malta Police Force.

The Malta Police Force is one of the oldest police forces in Europe having been established at the outset of the British colonial period in 1814 by the first Governor of Malta, Sir Thomas Maitland. After Malta was granted Independence in 1964, the Maltese Government assumed all responsibilities for the Malta Police Force.

The coin, released July 16, shows the emblem of the Malta Police Force on its obverse, which was designed by Noel Galea Bason.

The reverse bears the Luc Luycx design common to all €2 coins.

The coin was minted at the Royal Dutch Mint.

A total of 300,000 coins are being minted. In addition to entering circulation, the coin was issued in Uncirculated quality in rolls of 25 coins.

For further information about coins of Malta, email the Malta Coins Distribution Centre, visit its website or telephone it at (011) 356 2550 6006.