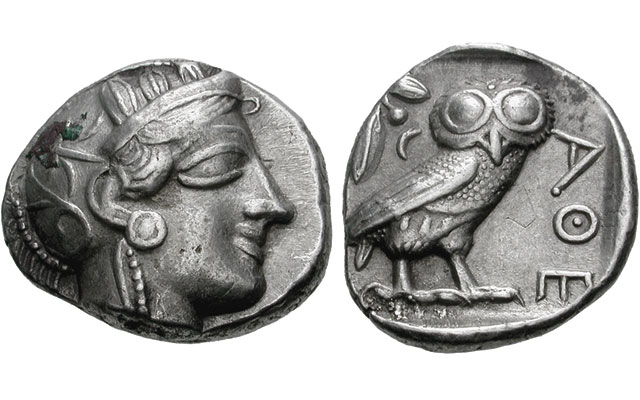 The Peloponnesian War strained the Athenian treasury so much that, experts believe, the city-state issued its own fourrées, or base-metal coins plated with precious metal, like this tetradrachm.

Editor's note: The following is the first of a five-part Coin World series about collecting emergency coinage, prepared by Jeff Starck for the March 2015 monthly edition of Coin World.

Making money is never as challenging, but never as needed, as during times of war and other periods of stress like coin shortages.

An abundance of emergency issues exist that were created at makeshift mints or at times when regular production was insufficient. These pieces often were made from creative materials, and many of these issues are highly collectible today.

Let’s explore five examples of how nations and warriors met the challenge of creating currency amid chaos.

Attica, a city in Athens, Greece, has a rich and early coinage history. It is also the source of the earliest pieces of emergency money in our presentation.

In 413 B.C., the Spartans captured Dekeleia and cut Athens off from its main silver source at Laurion. Athens’ need to raise funds to pay for its defense became so acute that, by circa 407 to 406 B.C., authorities ordered the melting of all available gold, which notably included seven statues of Nike at the Parthenon.

The gold from this melting, comprising 14 talents, was then struck in six coinage denominations, from staters to hemiobols, with the dies deposited at the Parthenon.

Experts believe that the strain of the war and a continuing barren treasury forced the city-state to also issue officially approved fourrées.

In most cases, fourrées are plated coins meant to deceive, featuring precious metal plated over a base metal core.

Athenian playwright Aristophanes, writing in two different works in 405 B.C. and 392 B.C., mentions “grievous coppers,” a distinct reference to the monetary situation in Athens resulting from the Peloponnesian War. The latter mention cites a decree from 394 B.C. that made the fourrées worthless, suggesting that the coins were demonetized after the financial situation improved.

Collectors and researchers have long sought to distinguish between official fourrée pieces and illegitimate issues. Discovery of a hoard of plated tetradrachms and drachms in 1902 at the Athenian port city of Piraeus was the largest piece of evidence to support the official status of these fourrées.

No plausible alternatives have been presented, and all the surviving issues are identical in condition, color and style, and were struck from a limited number of dies.

Extensive sales records of the official pieces are scant; as Heritage Auctions’ noted in a lot listing in a Sept. 6, 2012, auction, most surviving fourrées of Athens were circulating counterfeits.

Collectors should consult with professionals to obtain an authentic, official, fourrée.