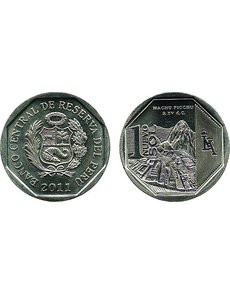 The “Lost City of the Incas,” Machu Picchu, is the subject for Peru’s latest circulating commemorative 1-nuevo-sol coin in the Wealth and Pride series. 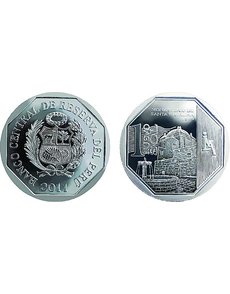 A monastery, the Monasteria de Santa Catalina in Arequipa, is the subject for the fifth coin in Peru’s Wealth and Pride series. It is the second coin from the series released in 2011.

A century after gaining worldwide fame, Machu Picchu is the subject of a new coin from Peru.

The copper-nickel-zinc coin, released July 15, is the latest in Peru’s Wealth and Pride series of circulating commemorative 1-nuevo-sol coins.

The isolated complex nestled high in the Andes (2,430 meters, or 7,972 feet), sometimes referred to as the “Lost city of the Incas,” today is a major draw for tourism to the region.

It is believed to have been built in the mid-15th century as an estate for the Incan emperor Pachacuti, and was inhabited a mere 100 years before the population died off or slipped away. It was untouched by the Spanish conquistadors, who otherwise plundered and destroyed other similar sites in their conquests.

Machu Picchu was little known until 1911 when American Hiram Bingham was led there by a young local boy. Bingham announce the site on July 24, 1911, and published a book with the “Lost City of the Incas” title. The National Geographic Society’s April 1913 issue of National Geographic spread the fame of Machu Picchu further afield.

The site was declared a UNESCO World Heritage Site in 1983, and in 2007 it was selected as one of the New Seven Wonders of the World.

Huayna Picchu or Wayna Picchu (meaning Young Peak), juts above the famous site on the reverse of the coin, with Machu Picchu’s famous terraces and rock formations in the foreground.

The site name and Roman numerals indicating the 15th century appear above the scene, with the denomination to the left.

The Machu Picchu coin is the sixth coin in the series from Peru, which began in 2010 to mark landmarks of cultural patrimony.

The series is intended to emphasize the cultural patrimony of the country in a manner that reaches the populace. Three coins were issued in 2010, with three coins issued so far in 2011.

The issuance of the Machu Picchu coin follows the May 20 release of the fifth coin in the series. The fifth coin celebrates the Monasterio de Santa Catalina in Arequipa, Peru.

The cloistered convent was opened in 1580 thanks to a donation from a rich widow in 1579, and is “a miniature city within a city that was opened to the public only in 1970,” according to 1,000 Places to See Before You Die.

The site covers a complete city block, and just a handful or so of nuns remain on the grounds, living in the northern corner; the rest of the facility is open to the public.

Both reverses also carry the Mint mark or symbol against a backdrop of vertical lines.

The coins weigh 7.32 grams, measure 25.5 millimeters in diameter and have a mintage limit of 10 million pieces for each design.

The reverses of these two new circulating commemorative coins were designed by Eduardo Paredas Medina.

The 1-nuevo-sol coins have a face value equivalent to 36 cents U.S.

Collectors outside of Peru interested in collecting this series will have to search the secondary market. The coins are not available directly from the Peruvian government. ¦